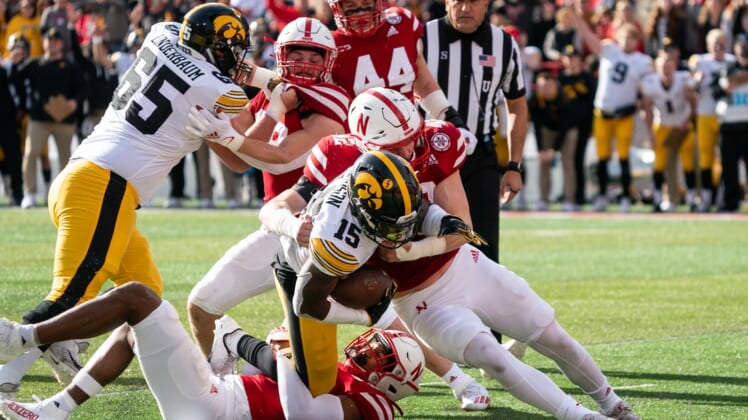 No. 16 Iowa rallied from down 15 points late in the third quarter to keep alive its shot at a Big Ten West Division title, winning 28-21 at Nebraska on Saturday afternoon in Lincoln, Neb.

A 2-yard run by quarterback Spencer Petras, who took over for Alex Padilla after halftime, with 2:58 left gave the Hawkeyes (10-2, 7-2 Big Ten) the victory after trailing 21-6 with less than 21 minutes remaining. They earned at least a share of the West title but need No. 14 Wisconsin to lose Saturday at Minnesota in order to clinch a spot in the Big Ten championship game.

Petras’ scoring run was Iowa’s only offensive TD of the game. The Hawkeyes also scored on a blocked punt, recorded a safety and got four field goals from Caleb Shudak.

Nebraska (3-9, 1-8) lost its 18th consecutive game against a ranked opponent, losing by one score for the 20th time under coach Scott Frost. All nine losses this season have been by single digits.

Down 14-6 at the half, Petras led Iowa into the Nebraska red zone before Tyler Goodson — who ran for 156 yards to become the first Hawkeye rusher to top 1,000 yards in a season since Akrum Wadley in 2017 — lost a fumble at the 6-yard line.

The Cornhuskers turned that takeaway into points, with freshman quarterback Logan Smothers scoring on a 1-yard run to make it 21-6 with 5:54 left in the third quarter. During the drive he completed passes of 27 to Austin Allen — who set the single-season school record for receiving yards by a tight end — and 40 to Omar Manning, the latter as Smothers was hit hard in the pocket.

Smothers was called for intentional grounding in the end zone with 9:56 left, pulling Iowa within 21-18 on the safety, and the Hawkeyes tied it at 21 on Shudak’s fourth field goal of the game, a 44-yarder with 7:21 remaining.

A 55-yard Goodson run got Iowa into scoring position on its game-winning drive, with Petras finding the end zone four plays later.

Smothers, starting in place of the injured Adrian Martinez, was intercepted by Iowa’s Jermari Harris near the goal line with 43 seconds left to end Nebraska’s comeback chance. Smothers threw for 199 yards on 16-of-22 passing and ran for 64 yards and two TDs.