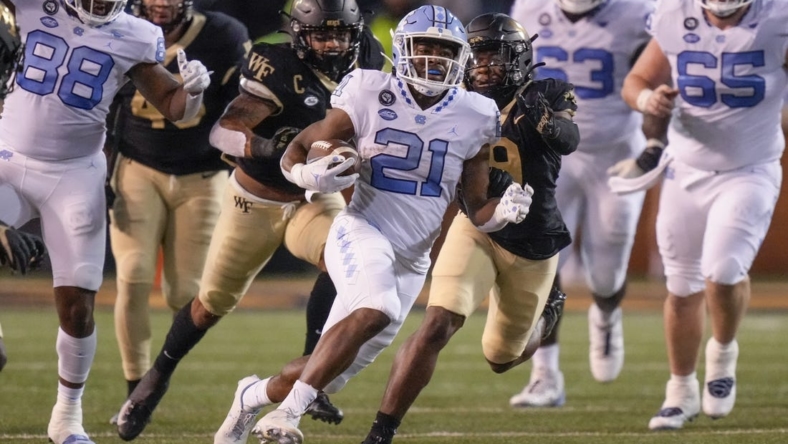 Drake Maye threw for three touchdowns and ran for one, but it took a late field goal for No. 15 North Carolina to pull out a 36-34 victory against host Wake Forest on Saturday night in Winston-Salem, N.C.

With the win, the Tar Heels clinched an Atlantic Coast Conference divisional title.

Noah Burnette’s 33-yard field goal with 2:12 to play provided the only points of the fourth quarter.

The Tar Heels are 6-0 in road games after not winning away from home last year.

North Carolina’s only other divisional title came in 2015, when it lost to Clemson in the championship game.

With the score 34-33, both teams had long drives go for naught. North Carolina went 80 yards but was stopped at the 1-yard line on an incomplete fourth-down pass.

The Demon Deacons marched 91 yards. With about nine minutes to play with a snap at the North Carolina 10, Hartman lost a fumble.

Wake Forest had its first lead of the game when Hartman threw to A.T. Perry for a 32-yard touchdown with 8:35 to play in the third quarter. Maye’s 5-yard run gave North Carolina the lead again before a Hartman-to-Greene play of 60 yards just 61 seconds later made it 34-33, with a two-point conversion failing.

North Carolina scored on its first three possessions and held a 21-7 lead less than 17 minutes into the game. After Hartman’s 7-yard scoring pass to Greene tied things at 21-all, Maye connected with Downs from 20 yards out to send the Heels into the break with a 27-21 edge.