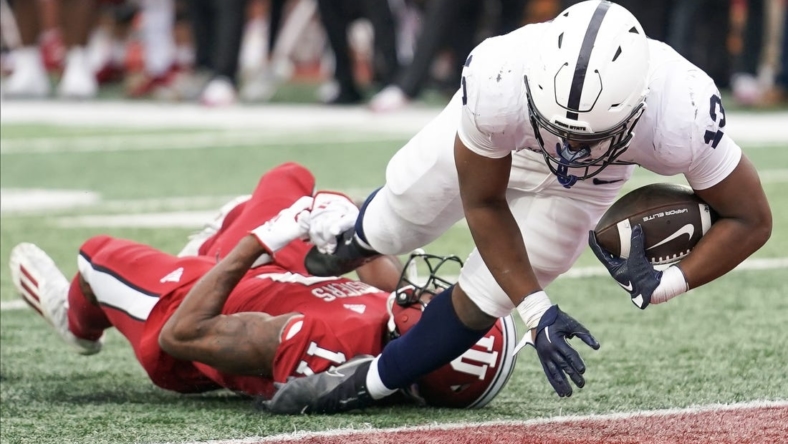 Kaytron Allen finished with three rushing touchdowns and 158 yards from scrimmage as No. 15 Penn State cruised to a 45-14 win against host Indiana on Saturday in Bloomington, Ind.

PSU quarterback Sean Clifford recorded 229 yards and an interception on 15-for-23 passing, and Mitchell Tinsley had five catches for 63 yards.

Sorsby threw an interception on Indiana’s second drive of the second half. Thanks in large part to Allen’s 45-yard catch-and-run, Penn State marched 96 yards to the end zone. Allen capped the seven-play drive with a 6-yard rushing TD.

Backup quarterback Drew Allar later threw a 1-yard touchdown to Harrison Wallace III and a 4-yard score to Theo Johnson at the beginning of the fourth to secure the victory.

Allar totaled 75 yards through the air, with two touchdowns on 9-for-12 passing.

Allen rushed for a pair of scores in the second quarter before Jake Pinegar kicked a 50-yard field goal with 50 seconds left in the first half to send the Nittany Lions into the break with a 24-7 lead.

PSU’s defense was dominant through the first 30 minutes of action, picking up six sacks. Tuttle exited the game with an apparent shoulder injury following one of those sacks. He completed 9 of 12 passes for 82 yards and a TD before Sorsby took over.