No. 15 Miami takes on So. Mississippi, Frank Gore Jr. 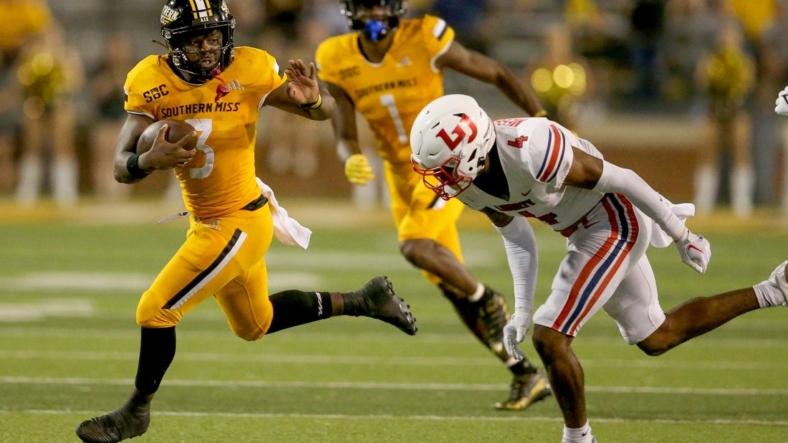 That will be Job No. 1 for 15th-ranked Miami (1-0) Saturday afternoon when it plays host to Southern Mississippi (0-1).

Gore, son of the former NFL star running back, ran 32 times for 178 yards, a 5.6 average, and two touchdowns last week in a 29-27 four-overtime loss to visiting Liberty.

“He’s got really good vision and instincts,” Hurricanes defensive coordinator Kevin Steele said. “He got to touch the ball 32 times. That’s a lot.”

Then again, the Golden Eagles — who enter Saturday’s game as 26-point underdogs – completed only four passes against Liberty, throwing the ball only 13 times. That’s not a lot.

Three Golden Eagles players threw the ball against Liberty, including Gore, who went 1-for-4 for 48 yards. Gore, who is from Miami and will be making a homecoming on Saturday, is a running back by trade. But the Golden Eagles at times line him up behind center in a Wildcat formation.

Southern Miss’ main QB is Ty Keyes, a 6-2, 215-pound redshirt freshman who went 4 of 8 for 89 yards against Liberty. He was intercepted twice.

“He’s always been super talented,” Southern Miss coach Will Hall said of Keyes. “He’s just now starting to get it.”

Trey Lowe was the Eagles’ other passer on Saturday, going 0-for-1.

Because of that relatively weak passing game, Miami is expected to feast on a Southern Miss team that is 6-20 going back to the end of the 2019 season.

Miami flexed on Bethune-Cookman last Saturday, winning 70-13, as the Hurricanes scored touchdowns on nine of their 11 possessions. They had only one true error, and that came on a fumbled center-snap exchange. The other non-touchdown drive came when they ran the clock out at the BC 9-yard line at the end of the game.

Against Southern Miss, the Hurricanes have more available talent as star running back Jaylan “Rooster” Knighton is expected to return from injury. He would add to a ground game that already includes Ole Miss transfer Henry Parrish Jr., who rushed for three first-half touchdowns and had 108 yards and a 7.7 average in his Hurricanes debut.

The third running back in Miami’s mix is 6-foot, 240-pound battering ram Thad Franklin, who had nine carries for 78 yards, an 8.7 average and two touchdowns.

Miami quarterback Tyler Van Dyke, a potential first-round NFL pick in 2023, is coming off a light work day when he completed 13 of 16 passes for 193 yards, two TDs and no interceptions in less than three quarters of play.

The Hurricanes’ top receiver was Xavier Restrepo, who caught five passes for 100 yards and one TD.

“It was a pretty good performance by the guys, and I’m really proud of their focus,” Hurricanes offensive coordinator Josh Gattis said. “Tyler went through his reads in the correct way, and he managed the game. Tyler made some big-time throws, especially the deep shot to Restrepo.”