No. 15 Auburn shuts down George Mason in opener 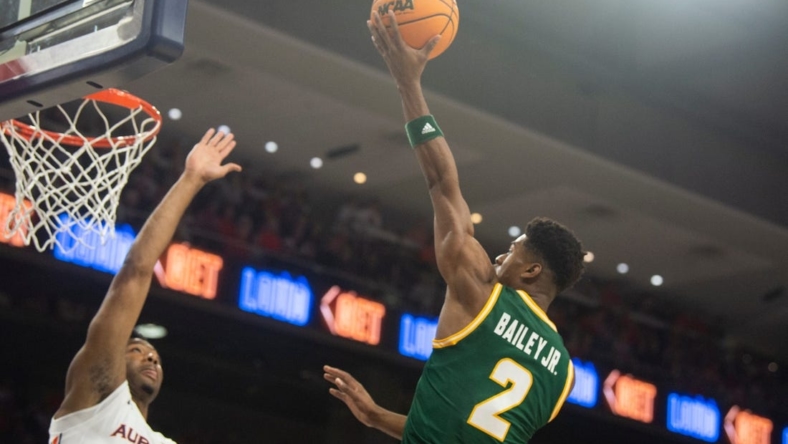 No Jabari Smith. No Walker Kessler. No problem.

In its first game without the SEC Freshman of the Year and the Naismith College Defensive Player of the Year, No. 15 Auburn used a 10-man playing rotation and a stifling defense effort to race past George Mason 70-52 in its season opener.

Auburn led Division I basketball with an average of eight blocked shots per game last season. The Tigers had 10 against the Patriots.

Newcomer Johni Broome made his presence felt early and often in the post in his quest to pick up the slack for the losses of Smith and Kessler. The Morehead State transfer had 12 points, six rebounds and four blocked shots.

Broome got the Tigers’ season off and running with a tip-in for the game’s first score. He followed that up with an offensive rebound and put-back to put Auburn up 4-0.

The Tigers jumped out to a 13-2 lead when Green raced down the court and hit a layup following a Johnson steal. The lead bloomed to 18-5 with 12:33 to play in the first half when Johnson found Traore under the basketball for a nifty assist.

The Tigers led 26-9 and were in the bonus with six minutes to go in the first half, but the Patriots cut the lead to 31-24 behind a 13-2 run to conclude the half.

Auburn rushed out to a 46-33 lead with 12:44 to play in the second half behind a 15-9 run. George Mason never could make up enough ground to threaten the Tigers after that.

Auburn limited forward Josh Oduro, the leading scorer in the Atlantic 10 last season, to just five points in the first half. He finished the game with eight points after getting into second-half foul trouble.

Auburn extended its home win streak to 19 games with the victory.