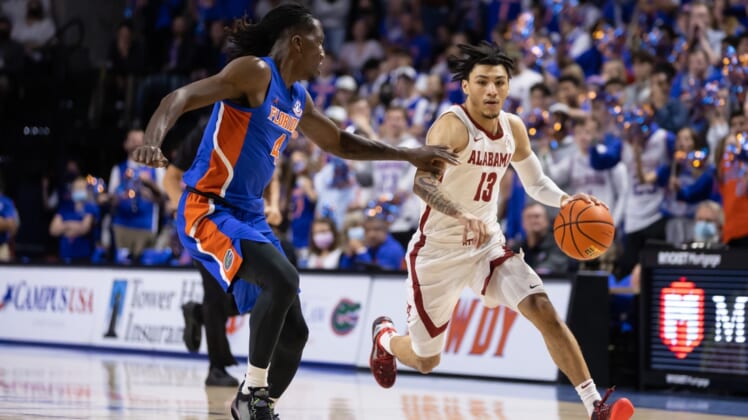 Juwan Gary and Jahvon Quinerly each finished with 19 points to lead No. 15 Alabama to an 83-70 road victory over Florida on Wednesday night in Gainesville, Fla.

All five starters scored in double figures for the Crimson Tide (11-3, 2-0 SEC), who picked up their first road conference win of the season.

The Gators (9-4, 0-1 SEC) dropped their conference opener in what was their first game in two weeks after dealing with COVID-19 issues.

Gary led Alabama on the glass with eight rebounds while Quinerly conducted the Crimson Tide’s offensive attack with five assists.

The two helped Alabama wear down Florida in the second half as the Crimson Tide scored 21 points off 20 Florida turnovers in the game.

Colin Castleton led the Gators with 19 points and seven rebounds.

Alabama improved its shooting touch in the second half, which helped it pull away. After shooting 31.4 percent in the first half, the Crimson Tide hit 18 of 37 shots (48.6 percent) after halftime as they attacked the rim and finished with a 40-26 advantage in points in the paint.

Ellis took a hit to the mouth while diving for a loose ball less than two minutes into the second half and had to leave the game. Ellis returned and scored seven points during a 14-0 run which helped Alabama take a 58-43 lead with 12:18 left.

The Gators used an 8-2 run to cut the Crimson Tide’s lead to 66-61 with 6:06 left until back-to-back buckets from Quinerly and Ellis stretched the lead back to nine.

Castleton’s jam with 3:07 to go cut Florida’s deficit to 73-67. But Gary scored six consecutive points for Alabama to stretch the Tide’s lead back to 11 and effectively put the game out of reach.