No. 14 Texas kicks off Big 12 play against Oklahoma State 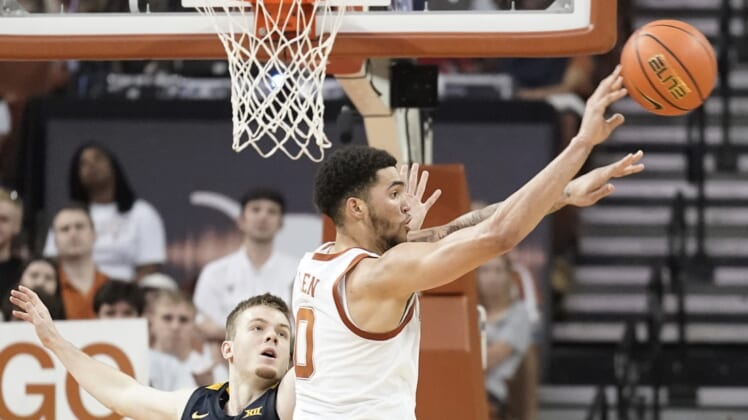 No. 14 Texas looks to build on a six-game winning streak and a successful start in Big 12 Conference play when it battles gritty Oklahoma State on Saturday afternoon in Stillwater, Okla.

The Longhorns (12-2, 2-0 Big 12) head north after a 70-57 comeback win at shorthanded Kansas State on Tuesday. Marcus Carr led Texas with 19 points while Timmy Allen racked up a double-double with 17 points and a career-best 14 rebounds, Courtney Ramey tallied 14 points and Dylan Disu hit for 10.

Allen had 13 of his 17 points in the second half, when the Longhorns erased a six-point halftime break while outshooting the Wildcats 54.2 percent to 22.2 percent over the final 20 minutes. Texas committed a season-low six turnovers and forged a 40-28 rebounding edge.

“On a night where the first half got away from us, (we had) the poise to come back and play well in the second half,” Texas coach Chris Beard said. “I thought it was a good win for us against a quality team.”

Texas did not go to the free-throw line in the first half, opting to take shots from outside despite the fact Kansas State had only seven available players because of COVID. That changed in the second half.

“You know, we’re not the biggest team, but we have a lot of skilled guys who can get busy down there in the paint,” Allen said. “So, I think playing inside-out is big for our team.”

Texas played without guard Andrew Jones, who did not make the trip to Kansas because of COVID-19 protocols. Jones’ availability for Saturday’s game is to be determined.

The Longhorns improved to 12-0 this year when holding their opponent below 60 points. Texas leads Division I in scoring defense while allowing just 52.3 points per game.

The game was Oklahoma State’s first in 17 days because of a COVID-19 pause. The Cowboys’ defense shackled Kansas, keeping the Jayhawks scoreless for the final 9:29 of the first half while rallying to tie the game at 29 at halftime.

Ultimately, Oklahoma State’s shooting came back to haunt it as the Cowboys finished 25 of 70 (35.7 percent) from the field and made only 4 of 17 attempts from beyond the arc. Oklahoma State’s defense certainly did its part, forcing 17 turnovers, but the Cowboys didn’t score over the final 3:14 of the loss.

“We just didn’t make enough open shots,” Oklahoma State coach Mike Boynton said afterward. “(Kansas) made tough shots, we missed open shots, and that was the difference in the game. Shotmaking continues to be an Achilles’ heel for us. And we’ve got to figure out a way to do better there.”

Oklahoma State was supposed to begin conference play against Texas Tech on Jan. 2, but that game was pushed back to Jan. 13 because of COVID-19 issues. Teams’ ability to navigate the challenges posed by the pandemic will go a long way in determining their success this season.

“You can’t ride those peaks and valleys emotionally,” Boynton said. “You’ve gotta just try to stay as much as you can in the middle of the road and do the next job the best you can, and I think our guys are just continuing to work at it.”