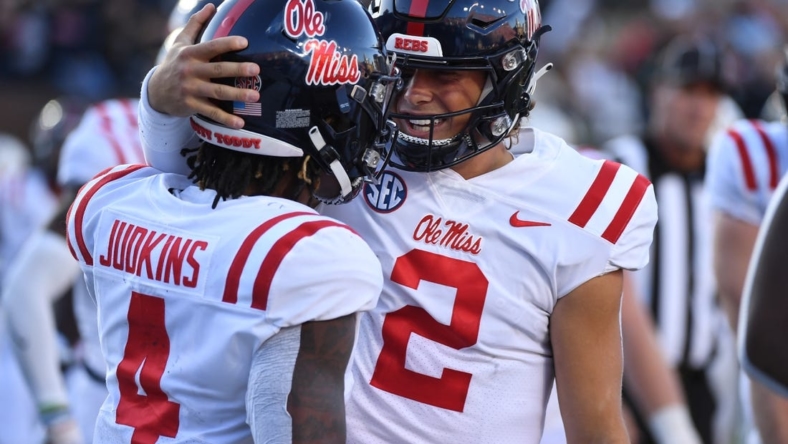 No. 14 Ole Miss looks to put a special season back on track Saturday night against a struggling Arkansas squad in Fayetteville, Ark.

The Rebels (8-2, 4-2 Southeastern Conference) stumbled at home against Alabama last Saturday, their second loss in three games, but still have the chance to reach double-digit wins.

The Razorbacks (5-5, 2-4) play their final home game of a roller-coaster campaign. Arkansas has lost two in a row and five of their last seven.

Last Saturday, Ole Miss failed to convert a fourth-down pass which could have kept their SEC West division title hopes alive with a win. Instead, Crimson Tide star safety Brian Branch reached out and knocked down Jaxson Dart’s pass intended for Jonathan Mingo over the middle.

That play — plus Georgia’s 45-19 domination of Mississippi State later that night — locked in the participants for the SEC title game in Atlanta on Dec. 3. It will be the top-ranked Bulldogs and the No. 6 LSU Tigers.

So what does it take to get over the hump and get to Atlanta?

“Make one more play,” Ole Miss coach Lane Kiffin said. “There’s not some magic formula of we got to go change all those things or do all these things different. Games come down to one possession, one-play games like that, one side makes the plays and finds a way to win. (Alabama has) been in a number of them this year.”

In order to duplicate last season’s 10-win regular season in 2021, the Rebels must win at Arkansas and return home to beat Mississippi State in the Egg Bowl. A third straight victory over its rival in that series would give them 10 and likely an appearance in a major bowl game.

The Razorbacks aren’t looking for any magic at his point — one more win over their final two games (Ole Miss, at Missouri) to become bowl eligible would do just fine.

Coach Sam Pittman’s effort to beat the Rebels will likely depend on better quarterback play from regular starter KJ Jefferson or either Malik Hornsby or Cade Fortin.

Jefferson, a dynamic dual-threat signal caller, is a native of Sardis, Miss.

In last year’s game back in his home state in Oxford, he passed for 326 yards and three touchdowns and ran for 85 yards and three scores, but his two-point throw for the win fell incomplete, giving Ole Miss a 52-51 win in the wild affair.

Hampered by injuries and missing two of the squad’s 10 games, Jefferson has thrown for 1,981 yards and 17 TDs with just three interceptions. He’s added 425 rushing yards and six scores.