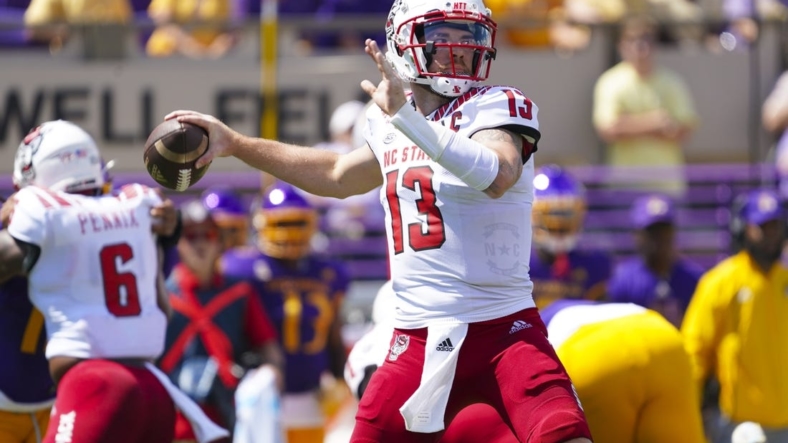 East Carolina’s hopes of upsetting local rival No. 13 N.C. State were dashed when kicker Owen Daffer missed what would have been a game-winning field goal from 41 yards out with nine seconds to play. In the season-opener for both teams in Greenville, North Carolina, the visiting Wolfpack escaped with a 21-20 victory over the Pirates.

East Carolina (0-1) seemed to have swung momentum when they picked off N.C. State (1-0) quarterback Devin Leary late in the fourth quarter. Four plays later, ECU found the endzone on a three-yard scamper by Rahjai Harris.

But Daffer also missed the point-after-try after Harris’ score, which would’ve tied the game with 2:58 to play. After forcing a Wolfpack three-and-out, ECU put together a six-play, 47-yard drive to put Daffer in scoring position, but the kick sailed wide right.

It’s the first time the Wolfpack have won in Greenville since 2007.

After falling behind 7-0 early in a packed-out Dowdy-Ficklen Stadium, the Wolfpack swung the game back in their favor by scoring twice in the span of 66 seconds.

First, Leary capped off an eight-play 64-yard drive with a 12-yard touchdown pass to Thayer Thomas. Then, after forcing an ECU three-and-out, N.C. State’s Josh Provillon broke through to block Luke Larsen’s rugby-style punt. The ball bounced into the endzone, where the Pack’s Sean Brown recovered it.

Thayer’s scoring grab moved him into second place all-time in program history with 21 receiving touchdowns. He finished the day with four catches for 58 yards. Leary was 17-of-33 through the air for 211 yards.

N.C. State tacked on another touchdown just before halftime, as Demi Sumo-Karngbaye covered 24 yards as he raced into the endzone.

The Wolfpack were marred in this game by an ineffectiveness on third downs — just 4-of-13 on conversions — and penalties, picking up eight flags for 73 yards.

N.C. State’s Payton Wilson — a team captain and preseason All-ACC selection at linebacker — exited the game in the second quarter and did not return to play after suffering an apparent upper body injury.

The game set an attendance record for the Pirates’ stadium, with an announced crowd of 51,711.