No. 13 Indiana pulls away to defeat Morehead State 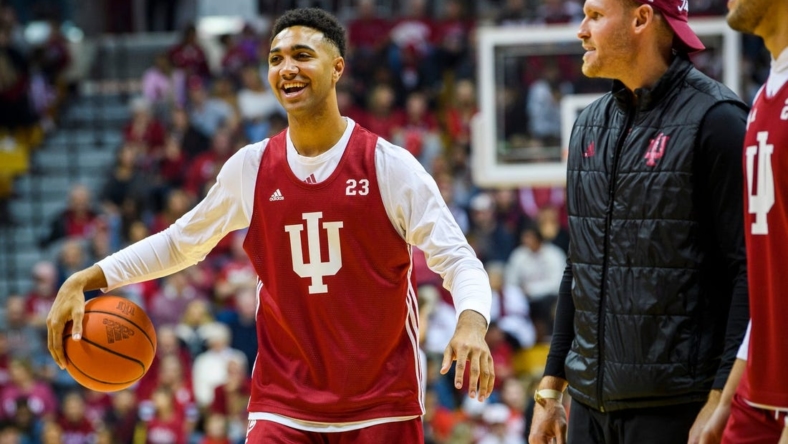 Preseason All-American Trayce Jackson-Davis recorded 15 points and seven rebounds to help No. 13 Indiana cruise to an 88-53 victory over visiting Morehead State in the season opener for both teams Monday at Bloomington, Ind.

Mark Freeman scored 14 points in the first half for Morehead State but sat out the second with a twisted ankle. Drew Thelwell added 11 for the Eagles, who committed 21 turnovers to Indiana’s 10.

Morehead State connected on 37 percent of its shots and 9 of 30 from behind the arc.

Indiana led 16-9 after a dunk by Jackson-Davis before Morehead State scored the next eight points. Freeman capped the run to give the Eagles a 17-16 edge with 12 minutes to go in the half.

Tamar Bates scored the next five points to give the Hoosiers a four-point edge before Freeman converted a four-point play to tie it at 21 with 9:17 remaining before the break.

But Morehead State committed seven turnovers while going scoreless for 5 1/2 minutes. Indiana cashed in with 13 consecutive points, including a layup by Jackson-Davis to take a 34-21 lead with 4:16 remaining in the half.

Tucson Redding drilled a 3-pointer with 3:47 left to end the Eagles’ drought. But the Hoosiers rattled off seven more straight points with Jackson-Davis’ three-point play pushing the lead to 41-24 with one minute left.

The Hoosiers led by 12 at the break and then tallied the first six of the second half to make it 47-29.