No. 13 Auburn rolls past Winthrop behind Johni Broome 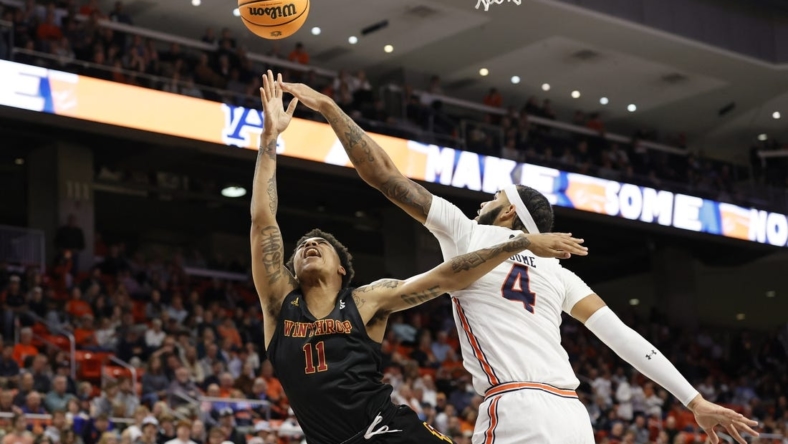 Behind a swarming defense and a double-double from forward Johni Broome, No. 13 Auburn rolled to a 89-65 win over Winthrop (2-2).

Broome, who played the previous two seasons at Morehead State, led Auburn (3-0) in scoring (18 points), rebounds (13) and blocked shots (five) in earning his first double-double as a member of the Tigers.

Guards Wendell Green Jr. and K.D. Johnson continued their sound backcourt play in the victory. Green had 14 points and was 4-for-6 from the 3-point line. He also added four rebounds and five assists. Johnson added six points, four rebounds and three assists.

A 26-9 run to start the second half gave Auburn an insurmountable 65-35 lead with les than 13 minutes to go in the game.

Auburn jumped out to a 12-2 lead early in the first half behind 3-pointers from Zep Jasper and Green as well as easy buckets by Broome and Chris Moore.

The Tigers maintained a 20-11 margin with 11:52 to play in the first half when Johnson found Traore under the basket for a layup.

Two Moore free throws pushed the Tigers lead to 31-20 with less than four minutes to play in the opening half. The Tigers closed to a 39-26 halftime lead behind 3s from Green and Johnson and a jumper from Jaylin Williams.