No. 12 UCLA scores 50, enough to put away Arizona State 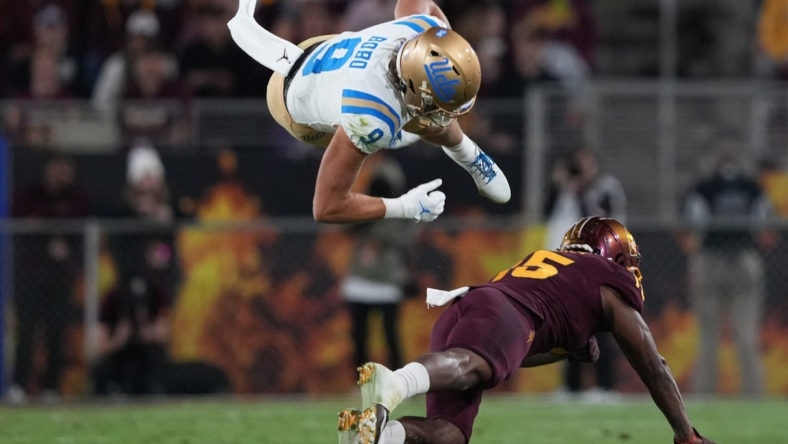 Dorian Thompson-Robinson threw for two touchdowns and ran for two more on Saturday night as No. 12 UCLA stayed alive for a Pac-12 Conference regular season title by outscoring Arizona State 50-36 in Tempe, Ariz.

UCLA’s Kazmeir Allen rushed for a game-high 137 yards on just 11 attempts, including a 75-yard scoring run in the third quarter.

UCLA finished with 571 total yards on just 62 plays despite playing without leading rusher Zach Charbonnet. The nation’s 10th-leading rusher with 964 yards entering the game, Charbonnet dressed and went through warmups as usual but never saw the field. The Bruins never disclosed why Charbonnet didn’t play.

Arizona State quarterback Trenton Bourguet completed 38 of 49 passes for 349 yards with two touchdowns and an interception. Xazavian Valladay rushed 20 times for 92 yards and two scores, including a 1-yard run with 6:24 left in the game to draw the Sun Devils (3-6, 2-4) within 42-36.

But the Bruins sealed the outcome with a 74-yard touchdown drive, culminating in Colson Yankoff’s 1-yard run up the middle with 2:30 remaining. A 2-point conversion pass allowed UCLA to hit the half-century mark.

Arizona State actually led 10-7 when Bourguet found Messiah Swinson for a 3-yard touchdown pass with 2:41 left in the first quarter. However, the Bruins erupted for 28 unanswered points, beginning with Thompson-Robinson flipping a 3-yard scoring strike to Keegan Jones with 32 seconds remaining in the period.

UCLA upped the lead to 28-10 at halftime when Jones rushed for a 10-yard touchdown, followed by a 9-yard strike from Thompson-Robinson to Michael Ezeike with 33 seconds left before intermission.

Thompson-Robinson made it 35-10 less than five minutes into the third quarter with a 4-yard touchdown run on the Bruins’ first possession of the second half.