No. 12 Texas breaks in new arena with win over UTEP 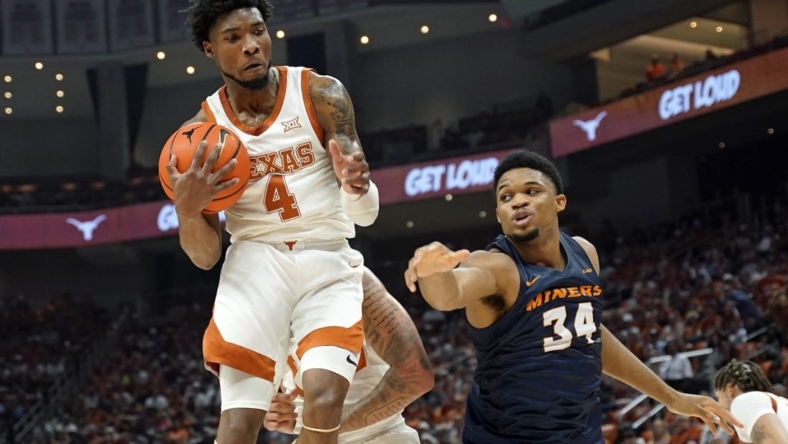 Tyrese Hunter scored 18 points as No. 12 Texas got serious contributions from its older newcomers and defeated visiting Texas-El Paso 72-57 on Monday in the season-opening game for both teams in Austin, Texas.

It was the first official game played at the Moody Center, the University of Texas’ lavish new multi-purpose arena that seats just under 11,500 for basketball.

The Longhorns sputtered early but used their defense to establish a 13-point lead at halftime. After the Miners pulled to within eight points deep in the second half, Texas reeled off a 15-3 spurt keyed by Marcus Carr and newcomer Sir’Jabari Rice to dispel any notion of a comeback.

Hunter played at Iowa State last year as a freshman. Rice, a transfer from New Mexico State, added 14 points, Carr scored 12 (eight from the free-throw line) and Dylan Disu hit for 10 for Texas.

Ze’rik Onyema (10 points) was the only player that scored in double figures for UTEP. The Miners shot just 40.4 percent from the floor and had 19 turnovers.

UTEP’s Tae Hardy scored the first points at the new facility on a putback layup 1:36 into the game. But after that, the Miners didn’t have much to show in a ragged first 10 minutes for both teams.

The first Longhorns’ basket in the game was a fastbreak layup by Timmy Allen at the 17:58 mark, but that was Texas’ lone early highlight. The Longhorns started 1 of 8 from the floor but rallied to make eight of their next 11 shots while forging a 18-4 run that garnered them a 27-12 lead with 4:56 to play in the first half.

Texas led by as many as 17 points after a Hunter 3-pointer with 4:13 remaining in the half and settled for a 33-20 advantage at the break.

Hunter led all scorers with 9 points through the first 20 minutes with Hardy and Onyema pacing the Miners with 6 points apiece by halftime.

UTEP battled back to within 52-44 after a baseline dunk by Kevin Kalu with 7:42 to play but would get no closer.