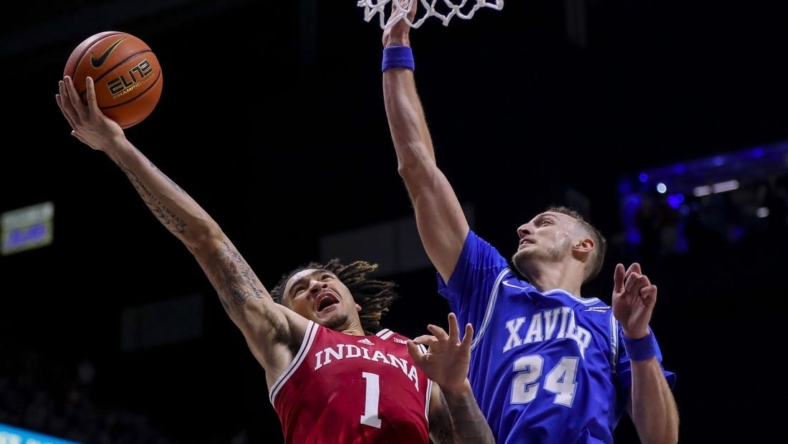 Trayce Jackson-Davis poured in 30 points and Xavier Johnson added 23 as No. 12 Indiana held on for an 81-79 win over host Xavier in the Gavitt Tipoff Games on Friday at Cincinnati.

Jackson-Davis and Johnson combined to shoot 20 of 24 from the field for the Hoosiers (3-0), who earned their first true road nonconference win since Nov. 30, 2011, at North Carolina State.

Xavier (3-1), which had two chances to take the lead in the final 30 seconds, received 15 points apiece from Zach Freemantle and Souley Boum. The Musketeers’ preseason all-Big East honoree Colby Jones, who was questionable to play because of a sprained ankle, fouled out in the final two minutes with 13 points, seven rebounds, six assists, three steals and two blocks.

Jackson-Davis hit his first seven shots from the field and Johnson made all four of his tries to combine for 28 of Indiana’s 38 first-half points. But at least one of the dynamic duo’s baskets came with a cost.

When Johnson swished a 3-pointer in front of Xavier’s bench with 2:55 left in the first half, he pulled the Hoosiers within 33-32. But while celebrating the basket, he was whistled for a technical that sent him to the sidelines with two fouls.

Boum hit both technical free throws, then fed Freemantle for a layup on the ensuing possession to help Xavier establish its 40-38 halftime lead.

When Johnson blasted down the lane for a layup with 18:55 remaining, he gave the Hoosiers their first lead since the opening five minutes.

Indiana earned its biggest lead at 54-46 on Malik Reneau’s transition layup with 14:07 to go, but Reneau also was hit with a technical for taunting. That led to two more Boum free throws and a long Adam Kunkel 3-pointer to slice the margin to 54-51.

The teams then traded the lead four times in 91 seconds before Johnson sank two free throws and turned a steal into a breakaway layup. That fueled an 8-0 run that gave Indiana a 73-66 lead with 4:11 to go.

Once again, Xavier cut into the deficit and had two chances in the final 30 seconds to erase Indiana’s 80-79 edge. The first time, Boum fell down after light contact in the frontcourt and Indiana forced a jump ball to regain possession with 0:24 left.