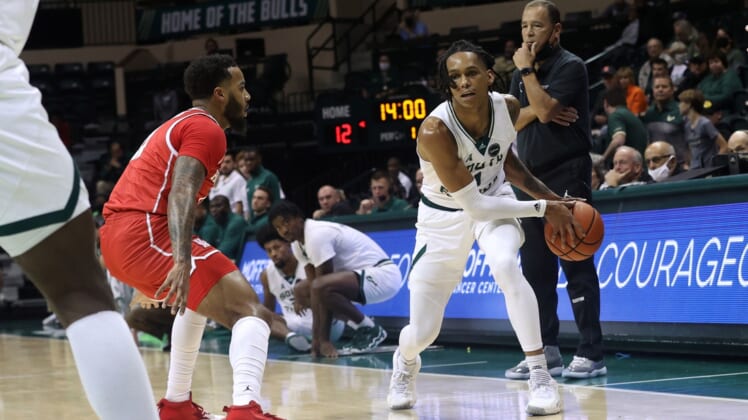 Josh Carlton scored a career-high 30 points to lead No. 12 Houston to an 83-66 road victory over South Florida in an American Athletic Conference clash Wednesday night in Tampa, Fla.

The graduate transfer from Connecticut also grabbed 11 rebounds for his first double-double of the season and the ninth of his collegiate career.

Carlton had 18 of his points in the first half and then scored 10 in the first five minutes of the second to help the Cougars (13-2, 2-0 AAC) quickly expand a three-point halftime lead into a 14-point advantage.

They led by double digits the rest of the way with their biggest lead coming at 69-50.

Fabian White and Kyler Edwards (15 points each) and Jamal Shead (13) also were in double figures for the Cougars, who dominated the game inside. They won the rebounding battle by a 40-31 margin and outscored the Bulls 42-22 in the paint.

Javon Greene and Jamir Chaplin scored 16 points each to lead the Bulls (5-8, 0-1), who were playing for the first time since Christmas Day after two scheduled outings were called off because of COVID protocols among their opponents.

The two teams swapped leads until reaching a 32-32 tie at the 3:17 mark of the first period when the Cougars’ dominance on the boards helped them close out the half with a 40-37 lead.

After matching the Cougars by hitting 44 percent from the field in the first half, the Bulls struggled in the second. They shot only 31.3 percent over the final 20 minutes to 62.5 percent for Houston, which stretched its winning streak in the series to 10 games.