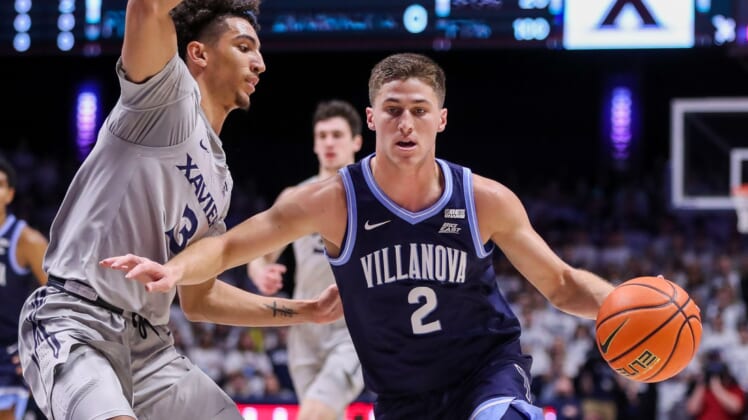 No. 11 Villanova will look for its seventh consecutive victory when it hosts Marquette on Wednesday in Philadelphia, Pa.

The red-hot Wildcats (13-4, 6-1 Big East) thrashed Butler 82-42 on Sunday. Collin Gillespie led the way with 17 points and played limited minutes since the win was essentially sealed early in the second half. Gillespie shot 6 of 7 in 29 minutes.

“I was really pleased with our performance. We were able to extend our bench a little bit, keep Collin fresh,” Villanova coach Jay Wright said. “We’ve been playing Collin a lot of minutes so that was good for us.”

Justin Moore added 15 points while Jermaine Samuels and Eric Dixon had 14 apiece. Dixon’s development has been especially impressive this season.

“We have a lot of growth left in us as a team,” Wright said. “There is a lot of improvement still to make. Part of it is getting balance offensively. I think Eric is a big part of that. Getting Eric going early was huge. They were taking Collin and Justin away, blitzing ball screens. They were finding Eric and he was delivering.”

The Wildcats will now aim to keep their positive momentum going at home, where they’re 6-0.

“We’ve been playing good defense, but early in the year we would have lapses when we had leads,” Wright said. “We’re starting to be able to do this for 40 minutes. Some of it is our starters really being locked in and another part of it is developing some depth so we don’t lose that focus.”

After an inconsistent start, Marquette (12-6, 4-3) will be searching for its fifth straight win.

The Golden Eagles lost in double overtime to Creighton on Jan. 1 and responded with wins over Providence, Georgetown, DePaul and Seton Hall.

Marquette earned a hard-fought 73-72 victory over the Pirates on Saturday. Darryl Morsell paced the Golden Eagles with a career-best-tying 26 points. Morsell has scored 20 points or more five times this season.

“I just want to win, man, at the end of the day,” Morsell said. “When the first one goes down for me, it kind of helps my confidence. The first one went down off the backboard. I’m like, ‘It might be one of them days.’ So I just stayed confident and played aggressive throughout the game.”

Morsell’s improvement has had a direct correlation with Marquette’s recent surge.

“I’m just playing basketball,” Morsell said. “I got a group of teammates (that are) constantly giving me confidence. And Coach (Shaka) Smart wants us to play with confidence. So I’m just out there trying to play with confidence. I’ve been around and done seen a lot of things. So I just try to make plays when I see an opportunity. With everybody around me having confidence in me, that just makes me much better.”