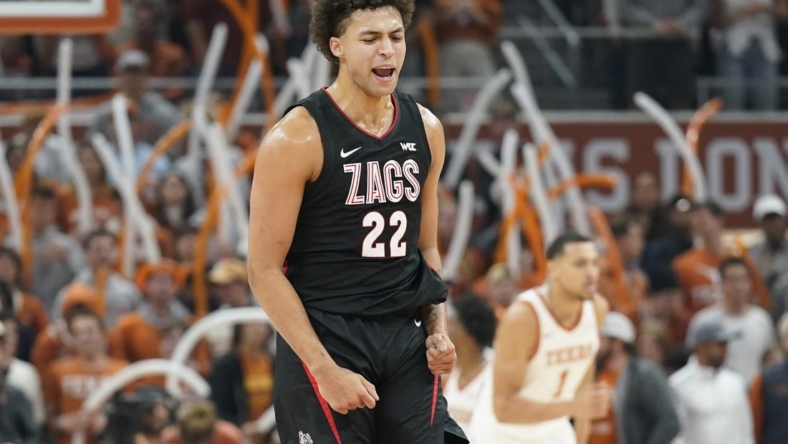 Tyrese Hunter scored a game-high 26 points Wednesday night and No. 11 Texas connected on 13 3-pointers in a 93-74 blowout of No. 2 Gonzaga in Austin, Texas.

Texas canned 51.5 percent of its field-goal attempts and posted an effective field-goal percentage of better than 62 percent, thanks to all the 3-pointers.

Drew Timme scored 18 points and grabbed nine rebounds for the Bulldogs (2-1) but also committed five of their 20 turnovers. Gonzaga shot 49 percent from the field, including 9 of 19 on 3-pointers, but experienced trouble with the Longhorns’ pressure defense most of the night.

Texas led for the last 30-plus minutes of the game, gradually pulling away behind an offensive onslaught not always seen last year. Coach Chris Beard’s teams have always built an identity on defense, and that defense gave a Gonzaga team that has reached No. 1 in each of its previous two seasons plenty of trouble.

The capacity-plus crowd of 11,313 at brand-new Moody Center went wild when Dillon Mitchell dunked consecutive lob passes late in the game to build a 90-67 advantage. Mitchell added a putback dunk following the final TV timeout for an emphatic capper to the Longhorns’ evening.

Zags coach Mark Few waved the white flag at the 4:16 mark of the second half when he yanked Timme with the margin at 86-67. Coming off a one-point win over Michigan State Friday night on the deck of an aircraft carrier just outside San Diego, Gonzaga simply couldn’t cope with Texas’ aggressive style on both ends.

Leading 47-37 at halftime, the Longhorns wasted no time putting the Zags away in the second half. A 14-5 run, capped by Hunter’s 3-pointer from the deep left wing, upped their advantage to 19 points.

Another 3-pointer by Hunter at the 10:23 mark increased the margin to 20 points at 75-55. The game’s remainder was a long celebration for Texas fans.