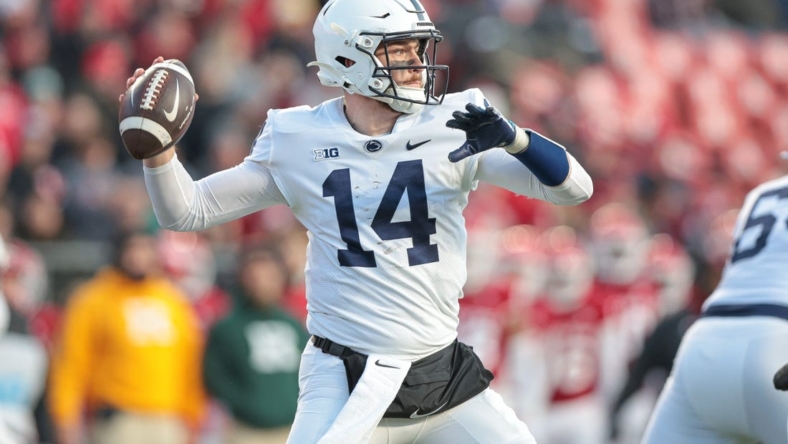 With its eyes on a New Year’s Day bowl game, No. 11 Penn State wraps up its regular season Saturday when it welcomes Michigan State to University Park, Pa.

The Nittany Lions (9-2, 6-2 Big Ten) are locked into third place in the Big Ten East, as the team cannot catch unbeaten rivals Ohio State and Michigan and cannot be caught by the other four teams, a group that includes disappointing Michigan State (5-6, 3-5).

Penn State has won its last three games by a combined margin of 130-24. Coach James Franklin earned his 100th career victory last weekend with a 55-10 romp over Rutgers and feels great about his team’s vibe with the regular season winding down.

Sean Clifford threw a touchdown and ran for another against Rutgers, while Penn State also scored on a kickoff return and twice more on fumble returns in a dominant overall performance. Now the Nittany Lions will have to avoid looking past the Spartans while remaining focused despite the potential distraction of Senior Day festivities.

“It’s totally fine and acceptable to recognize there are going to be some emotions that go with (Senior Day),” Franklin said. “You try to channel as much as you can.”

Another area of concern for Penn State this weekend will be the absence of top wide receiver Parker Washington (46 catches, 611 yards, two TDs), who is out for the season with an undisclosed injury. In his place, Clifford likely will continue to target Mitchell Tinsley, who posted team highs of five catches and 63 yards against the Scarlet Knights.

Michigan State is coming off a 39-31 double-overtime home loss to Indiana, which entered with a 1-6 conference record. The Spartans could not stop the Hoosiers’ rushing attack (44 carries, 257 yards, four TDs) and lost despite Indiana quarterback Dexter Williams II only completing two passes.

“We’re not gonna cry about it. We haven’t done that yet. We’re not gonna make excuses,” Spartans coach Mel Tucker said. “We’ve got to get it fixed. And one of the most important (parts) is what you do next. … It’s either do that or just quit. We’re not just gonna pack it in.”

Michigan State leads the all-time series with Penn State 18-17-1, including a 30-27 win last season. The winner of this annual matchup receives the Land Grant Trophy.

“Obviously we have a lot to play for this week,” Tucker said. “We have a trophy game vs. Penn State, an opportunity to play a top-10 team on the road in a very hostile environment. … And obviously, it’s the next game. And it’s the last regular-season game, guaranteed opportunity for us (to become bowl-eligible). So it’s huge.”