No. 10 USC puts up new look against pesky Stanford 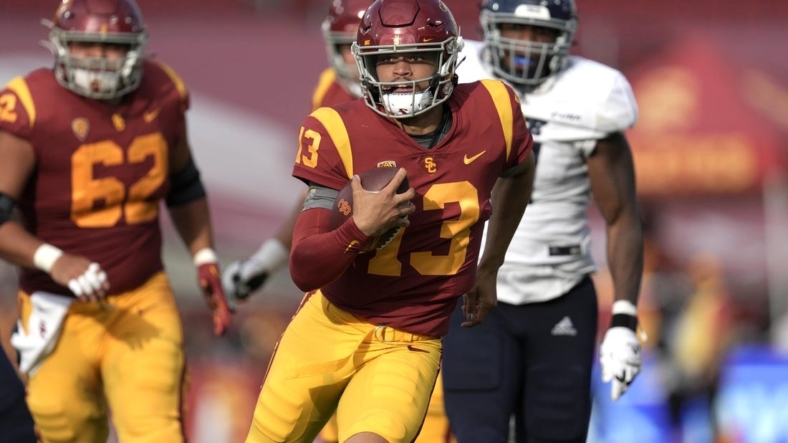 No. 10 Southern California will open Pac-12 Conference play against one of its most vexing rivals in recent years, traveling to Stanford for a prime-time matchup on Saturday at Palo Alto, Calif.

The Trojans (1-0) scored 52 points over the second and third quarters to cruise to a 66-14 rout of Rice last week. The blowout marked the debut of Southern Cal head coach Lincoln Riley, as well as the first appearance in a Trojans uniform for a variety of highly anticipated transfers.

Quarterback Caleb Williams, who followed Riley from Oklahoma, completed 19 of 22 passes for 249 yards and two touchdowns — both of which went to Pitt transfer and reigning Biletnikoff Award-winning receiver Jordan Addison.

Williams also rushed for a team-high 68 yards on six carries.

“We know the type of player we’re playing this week at the quarterback position, (and) you better bring your feet when you get your hands wrapped around this guy,” Stanford coach David Shaw said of containing Williams in the run game.

The Cardinal (1-0) opened the season with a 41-10 romp over Colgate, an opponent from the Football Championship Subdivision. Stanford outgained the Raiders 497-218, with quarterback Tanner McKee going 22-of-27 passing for 308 yards and two touchdowns.

Stanford’s 169 rushing yards last week marked the program’s most in a game since accruing 204 in a win over Vanderbilt last September – though 87 came on a single run by running back E.J. Smith.

Smith’s 87-yard carry 18 seconds into the game culminated in the first of his two touchdown runs. He had 118 yards on 11 total carries.

Running-game woes hampered the Cardinal in a disappointing 2021, as Stanford’s 86.9 rushing yards per game were the third fewest among Power 5 conference teams and the fewest in the Pac-12.

Stanford eclipsed 100 yards rushing just four times last season, and one such occasion came in the Cardinal’s 42-28 win at USC, also in the second game on the schedule.

The loss was the final game of then-coach Clay Helton’s tumultuous tenure at the helm of the program. For Stanford, it was the first of just two conference wins in an uncharacteristically down season for the program.

Before finishing the 2019 season at 4-8 overall, Stanford concluded on the right side of .500 every season from 2009 through 2018. Last year’s 3-9 finish was the second time in three seasons the Cardinal fell out of the bowl picture.

During its sustained run of success beginning in 2009, however, Stanford went 8-4 against USC. Shaw’s record in the series since becoming head coach in 2011 is 7-5. Riley is the fifth Trojans head coach or interim head coach Shaw will face in that time.

Last season, USC won its first two road games, against conference foes Washington State and Colorado. The Trojans lost their next three away from home.