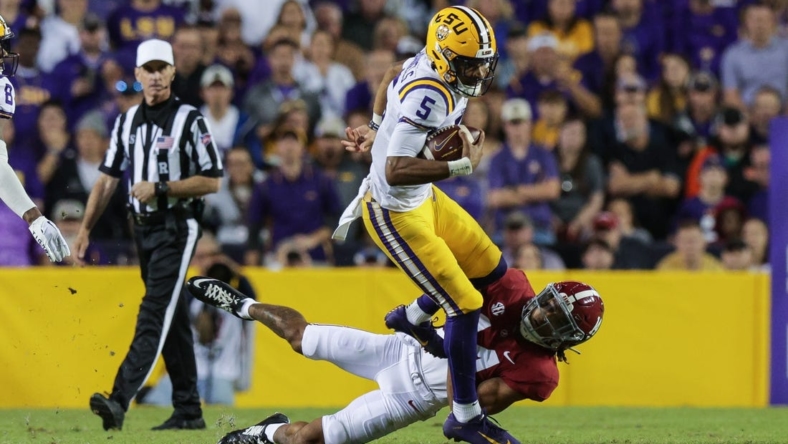 Jayden Daniels threw two touchdown passes, ran for a touchdown and passed for a winning two-point conversion as No. 10 LSU beat No. 6 Alabama 32-31 in overtime in an SEC game Saturday night in Baton Rouge, La.

Daniels passed for 182 yards, rushed for 95 and connected with Mason Taylor for the winning conversion as the Tigers (7-2, 5-1) took the lead in the SEC West.

Alabama got the ball first in overtime and Roydell Williams ran 1 yard for a touchdown and a 31-24 lead.

But on the Tigers’ first play, Daniels ran 25 yards for a touchdown and coach Brian Kelly decided to go for the win and Taylor barely crossed the goal line after catching Daniels’ pass.

Alabama’s Will Reichard kicked a 46-yard field goal with 21 seconds left in the fourth quarter to force overtime after the lead changed hands six times in the second half.

On the first possession of the third quarter, Alabama converted two fourth-and-1s on its way to Reichard’s 38-yard field goal that gave it the lead for the first time, 9-7.

LSU responded on the ensuing possession with a 75-yard drive that ended with Josh Williams’ 2-yard run for a 14-9 lead with 3:30 left in the third quarter.

LSU took a 7-0 lead early in the second quarter when Daniels threw a 30-yard touchdown pass to John Emery Jr.