No. 1 Tennessee ready to show it belongs on top vs. No. 3 Georgia 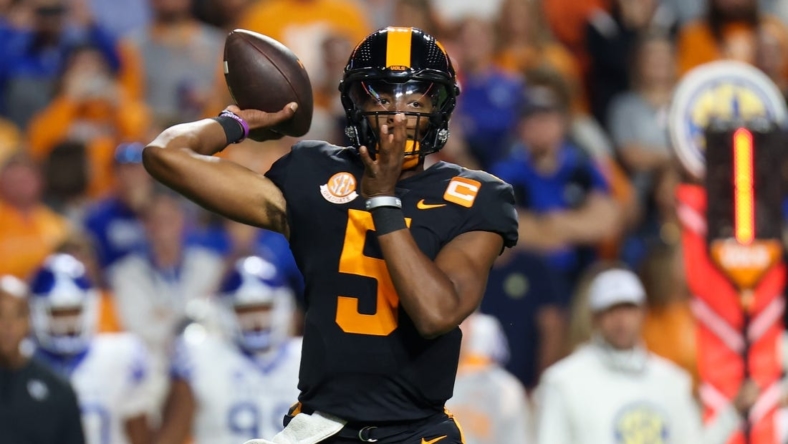 Defending national champion Georgia had been viewed as the top team in college football this season, but Tennessee has flipped the script.

When the first College Football Playoff rankings of the season were released on Tuesday night, the Volunteers were No. 1 while the Bulldogs were No. 3, creating even more drama for their big Southeastern Conference matchup on Saturday at Athens, Ga.

“I don’t know that we placed a timeframe on it,” Heupel said on ESPN after the rankings were unveiled. “I think that is one of the things that had our players buy into what we’re doing. We never set a ceiling. …

“There’s a long way to go. We obviously have a huge step this week in Athens, Georgia, but I love competing with this team every Saturday.”

Bulldogs coach Kirby Smart never overlooks information when it comes to motivational speeches, so the current pecking order certainly will be mentioned leading into the showdown.

Georgia has won the past five meetings entering a contest featuring two of the strongest offenses in the nation.

Tennessee quarterback Hendon Hooker has become a leading Heisman Trophy candidate by throwing for 2,338 yards with 21 touchdowns and just one interception. Big-play receiver Jalin Hyatt has 45 receptions for 907 yards and a nation-leading 14 touchdown catches.

Smart said Hooker is vastly improved over the quarterback the Bulldogs saw during a 41-17 victory in Knoxville last season.

“He’s one step ahead of where he was,” Smart said of Hooker. “To think of the reps and the games he’s played since the games last year, he’s just as elusive, he’s got probably the same arm talent. Those two don’t improve. It’s his decision-making and his processing. And the guys around him are playing better, too.”

Georgia quarterback Stetson Bennett has passed for 2,349 yards with nine touchdowns and three interceptions. He has a 22-3 career record as a starter.

Defense is where there is a pronounced difference between the clubs.

The Bulldogs remained sturdy on defense despite the loss of five NFL first-round picks and eight overall draftees from last season’s unit.

“The effort and attitude and toughness that they bring to the game is immaculate, and that’s what SEC football is about,” Hooker said. “This is the top brand of football.”

The Bulldogs received a blow on Tuesday when Smart said standout outside linebacker Nolan Smith would miss the remainder of the season due to a torn pectoral muscle. Smith will undergo surgery.