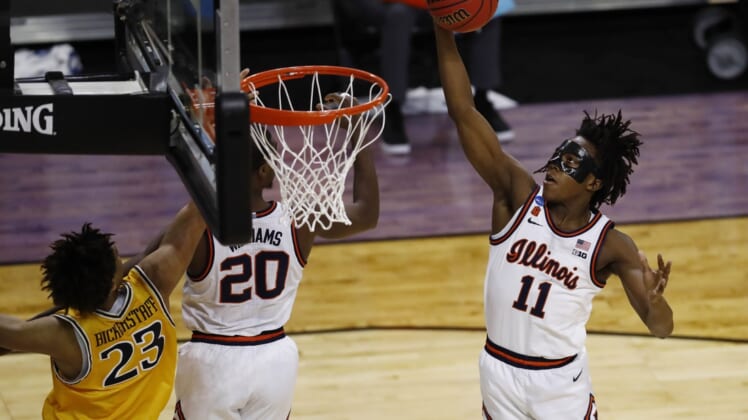 Kofi Cockburn scored a game-high 18 points in just 20 minutes Friday as top-seeded Illinois pulled away from 16th-seeded Drexel late in the first half and never looked back in a 78-49 first round win in the NCAA Tournament in Indianapolis.

National player of the year candidate Ayo Dosunmu added 17 points, 11 rebounds, five assists and three steals for the Fighting Illini (24-6), which will play Georgia Tech or Loyola on Sunday in the second round of the Midwest Region.

Xavier Bell scored 12 points and James Butler added 10 to pace the Dragons (12-8). Drexel struggled to make shots against a longer, stronger foe and had no answer for Cockburn, who had eight points in a row on a series of powerful dunks in the first half.

The Dragons hung around for most of the first half because they were able to keep their high-powered opponents in check with good defense. They trailed just 23-17 with 5:15 left in the half after Mate Okros converted a short jumper.

But Da’Monte Williams’ 20-footer on Illinois’ next possession kicked off the game-deciding run. The Illini ripped off a 13-2 spurt to establish a 36-19 margin on Dosunmu’s layup at the 1:38 mark, and took a 39-21 advantage to intermission.

Illinois eliminated any doubt to start the second half, upping the lead to 56-25 on Miller’s layup with 13:23 left. The Illini pounded the ball inside at will against a smaller opponent, owning a 52-10 advantage in points in the paint at one stage and converting 57.1 percent from the field for the game.

Even players who don’t score much, like Jacob Grandison, joined in the late-game fun. He rammed in consecutive dunks in the final five minutes as the lead reached as high as 33 points before he and other starters got the game’s remainder off.

Illinois earned a 38-29 advantage on the glass and committed just five turnovers.