No. 1 Kansas streaks by No. 16 Texas Southern 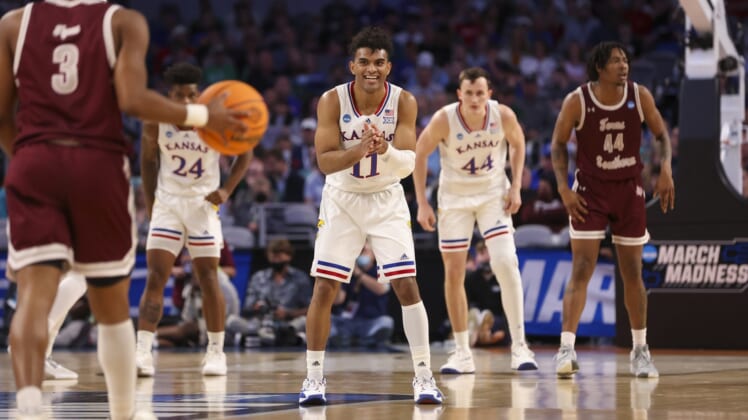 Remy Martin came off the bench to deliver 15 points and four assists as top-seeded Kansas pounded Texas Southern 83-56 in the first round of the NCAA Tournament in Fort Worth, Texas, on Thursday night.

Kansas (29-6) claimed its 15th consecutive first-round win, a streak launched under coach Bill Self’s watch in 2007. The Jayhawks led by as many as 34, and the blowout enabled Self to substitute liberally.

Kansas advances to the second round Saturday against Creighton, a 72-69 overtime winner over San Diego State.

After being limited by a strained knee through most of the Big 12 schedule, Martin provided the spark many had expected after the Arizona State transfer was named the conference’s preseason player of the year.

On Thursday, Martin went 6-for-8 and made an immediate impact after entering in the first half and playing much of the time alongside the Jayhawks’ starting offensive catalyst, Dajuan Harris, who added 12 points.

The Jayhawks placed five scorers in double figures; Christian Braun added 14 and Jalen Wilson and Ochai Agbaji each tallied 11. David McCormack snagged a team-high seven rebounds to lead a 44-32 advantage on the glass.

“There’s a big sense of urgency. We were just so ready to play, even this morning waking up,” Agbaji told truTV. “It’s been a really anxious day, but we got the first one out of the way and we’re ready to move on.”

The Jayhawks wasted no time taking control, using an 18-2 run featuring 8-for-9 shooting to go up 37-14 with 4:33 left in the half. They went on to post a 47-19 cushion at halftime of their 50th NCAA Tournament appearance and record 32nd straight.

Harris went 5-for-5 and scored 12 points to lead Kansas at halftime. Martin added nine points and four assists, all of them flashy while pushing the offense at a fast tempo.

Walker, the only Texas Southern scorer averaging double figures (10.1), scored seven first-half points. The Tigers opened with 25.9 percent shooting, going just 7-for-27. The 19 points were the fewest in the first half all season for the Tigers.