No. 1 Georgia pushing for perfection at Kentucky 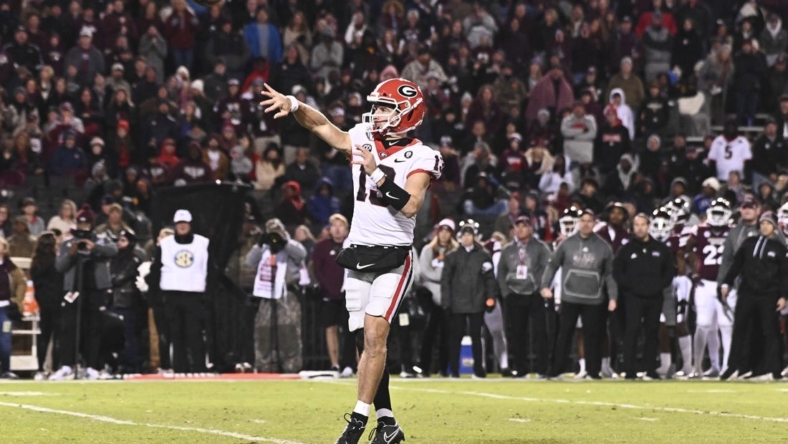 Top-ranked Georgia draws one more serious obstacle prior to the SEC championship game Saturday when it travels to Kentucky.

The Bulldogs certainly didn’t have a letdown last week after polishing off then-No. 1 Tennessee 27-13 on Nov. 5. They scored on the first play of the second half to take control of a 45-19 win at Mississippi State.

Georgia coach Kirby Smart, whose team seeks to defend last year’s national title, says it has kept working for ways to be better than their opposition.

“You got to do that by recreating yourself, by consistently outworking someone, and sometimes people get comfortable. We’re trying our best to be at our best. The challenge is, how do you do that better than the team you’re up against?”

The Bulldogs (10-0, 7-0) have demonstrated that consistency, aside from sloppy wins over Kent State and at Missouri. They’ve outscored opponents by 29 points per game with a top 10 offense and a top 5 defense.

Stetson Bennett boasts career-bests for completion percentage (67.6) and yards (2,895) with at least four games left in his season. And he’s not sacrificed mistakes for it, either, tossing only five interceptions in 330 attempts.

On top of that, Georgia spreads the wealth. Nine different receivers have at least 10 catches and six different players have rushed for more than 100 yards. It hasn’t escaped the notice of Kentucky coach Mark Stoops.

“We all understand it’s a real challenge,” he said. “It’s a team that’s very deep and very physical.”

A top 10 team going into October, last week’s stunning 24-21 loss to a Vanderbilt squad that entered the day with a 26-game SEC losing streak knocked Kentucky clear out of the College Football Playoff rankings.

Kentucky was outgained 448-322 by the Commodores. Its offensive line surrendered four sacks and quarterback Will Levis, who some believe is a first round NFL draft pick, threw for only 109 yards on 11 of 23 accuracy with an interception.

It was the kind of performance that raises many more questions than it provides answers and Stoops understands it.

“Under extreme, extreme pressure your habits are going to come straight to the surface and obviously I haven’t created enough good habits with this unit, with this team,” he said. “We do have a very good team. We have to play better in certain situations.”

One bright spot last week was Chris Rodriguez, who rushed for 162 yards and two touchdowns on 18 carries. The fifth-year senior has rushed for 733 yards despite missing the first four games.

The Bulldogs own a 61-12 advantage in the all-time series, winning the last 12 matchups.