No. 1 Georgia grinds to 11-0 with road win over Kentucky 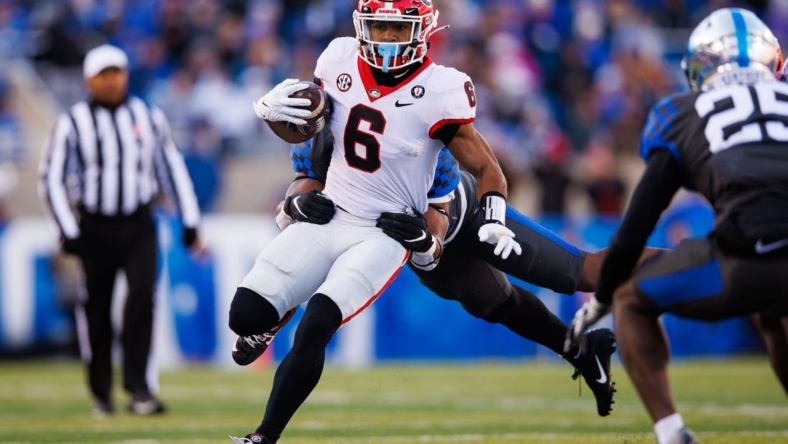 More efficient than spectacular, top-ranked Georgia closed out a perfect run through its Southeastern Conference schedule Saturday with a 16-6 win over Kentucky in Lexington, Ky.

The Bulldogs (11-0, 8-0) never really pulled away from the Wildcats (6-5, 3-5) but were never really threatened. Georgia scored on all three of its first-half possessions, although all were field goals, and finally tacked on a touchdown with a 9-yard run by Kenny McIntosh at the 6:22 mark of the third quarter.

Kentucky’s only points came when Will Levis threw an 8-yard scoring strike to Barion Brown with 9:52 left in the game. But the Wildcats weren’t able to convert on a 2-point pass that could have brought them within a score.

Kentucky missed on another chance to draw within one possession when a bad snap led to a poor hold with the laces facing the kicker that led Matt Ruffalo to hook a 38-yard field goal wide left with 4:17 remaining.

It was the second straight year that the Bulldogs ran through the SEC undefeated. They won this game with defense and the running game. They outgained the Wildcats 247-89 on the ground, limiting Kentucky’s star back Chris Rodriguez to 51 yards on 17 attempts.

Levis completed 20 of 31 passes for 206 yards and an interception. Brown was his main target with 10 catches for 145 yards.

Georgia quarterback Stetson Bennett didn’t have much of an impact, hitting 13 of 19 passes for 116 yards with an interception. But McIntosh took up slack with 143 yards on 19 rushes.

Jack Podlesny accounted for all the first-half points for the Bulldogs, connecting on field goals of 27, 24 and 37 yards. Georgia hogged the ball for just over five minutes on each of its first two drives before squeezing 11 plays and 56 yards into the half’s final 2:03.

The Bulldogs outgained Kentucky 363-295 but were held to fewer than 26 points for the first time this season.