Georgia coach Kirby Smart didn’t need to tell his top-ranked Bulldogs, who are on the verge of making school history, anything about Saturday’s regular-season finale against host Georgia Tech in Atlanta.

“They talked after the game and wanted everybody locked in,” Smart said about his team shifting focus to the Yellow Jackets after a 56-7 win over Charleston Southern. “It takes a lot of pressure off me when they’re saying it. When they speak, people listen. I think they’ll handle that right.”

Georgia certainly hasn’t given Smart any reason to think otherwise.

The Bulldogs (11-0) have won their past 10 games by at least 17 points and their 15-game winning streak dating to last season is the longest active one in the Football Bowl Subdivision. 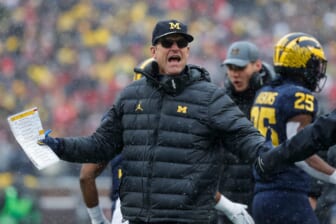 “We look at (playing Georgia Tech) as a chance to grow to be the best team we can become,” Smart said. “They stand in our way; we have an opportunity to go play them.”

“During our summer workouts I could just tell it was going to be different,” linebacker Channing Tindall said. “We had (practices) where we became closer and we talked about just knowing our ‘why’ and not just going out there and playing and playing for this or playing for that. Now, we are playing for his mother or his family or his situation.”

The Bulldogs opened as 35-point favorites against Georgia Tech (3-8), which has lost five straight games and is coming off a humiliating, 55-0 loss at No. 8 Notre Dame in which the Fighting Irish led 45-0 after two quarters.

Georgia has dominated Georgia Tech this century. The Bulldogs have won 10 straight games inside Georgia Tech’s Bobby Dodd Stadium dating to 1999 and have taken home the Governor’s Cup, which is awarded annually to the game’s winner, in 16 of the past 19 meetings.

With a win over the Yellow Jackets, Georgia would be all but guaranteed a spot in the College Football Playoff, which they haven’t made since 2017.

The Bulldogs will face No. 2 Alabama (10-1) in the Southeastern Conference title game on Dec. 4 in Atlanta, where a loss to the defending champion Crimson Tide likely wouldn’t knock Georgia out of the top four.

That’s because the Bulldogs haven’t been just good this season — they’ve been historically great, especially on defense.

But where Georgia really has separated itself is on the scoreboard. Georgia has allowed just 83 points, fewest in the nation, this season. That’s 81 fewer points than Oklahoma State and Texas A&M, which are tied for second with 164.

But even the 83 points can be misleading. UAB scored all of its points in a 56-7 loss on a pick-six, while Charleston Southern’s lone touchdown last Saturday occurred after Georgia linebacker Xavian Sorey picked off a tipped pass. Receiver Garris Schwarting swiped the ball away and took it 67 yards for a touchdown with 5:07 left in the third quarter.

Regardless, Georgia is focused on defeating Georgia Tech for the fourth straight meeting. The teams didn’t meet last year for the first time since 1944 due to coronavirus-impacted scheduling.

“It’s the next part, the next chapter, and what are they going to write about this chapter with each group?” Smart said. “I know our guys will be fired up and ready to go this week.”