No. 1 Daniil Medvedev will lose No. 1 ranking after Indian Wells defeat 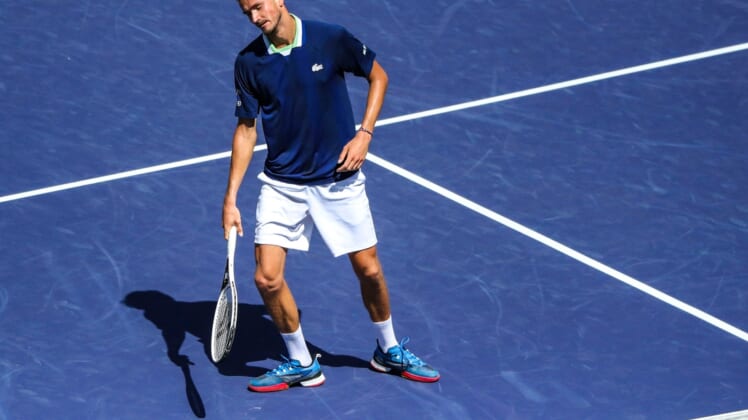 The 26-year-old Russian lost 4-6, 6-3, 6-1 to 26th-seeded Gael Monfils of France on Monday in the third round of the BNP Paribas Open in Indian Wells, Calif.

The result will drop Medvedev back below Serbia’s Novak Djokovic when the new rankings are released next week.

Medvedev got a first-round bye in Indian Wells, then beat Czech qualifier Tomas Machac 6-3, 6-2. He overtook Djokovic for the top ranking on Feb. 28, as the Serb missed the first major of the year, the Australian Open, and can’t compete in the BNP Paribas Open and the upcoming Miami Open because he is unvaccinated.

Medvedev had been the first player other the Djokovic, Switzerland’s Roger Federer, Spain’s Rafael Nadal and Great Britain’s Andy Murray to be rated No. 1 in the world since February 2004, when the United States’ Andy Roddick was on top.

Medvedev said postmatch, “I always say, when I play my best tennis, my good tennis, it’s really tough to beat me. But that’s the toughest part of tennis, to reproduce it time after time. That’s where (Djokovic, Federer and Nadal) are just unreal because no matter which conditions, no matter which surface, they are always winning tournaments a lot of the time or winning some crazy matches. I’m going to need to try to do better.”

Monfils, 35, beat the world No. 1 for just the second time in his career, the other being a victory over Nadal at Doha, Qatar, in 2009. He put 68 percent of his first serves in play compared to Medevdev’s 50 percent.

“I played great tennis,” Monfils said. “I knew I was in great shape and tough to beat. It’s always special to beat a world No. 1. …

“I moved great,” the 35-year-old said of his performance. “I was striking the ball very good and I’m full of confidence, so I’ll try to keep the flow.”

Next up for Monfils is a round-of-16 matchup against 19th-seeded Carlos Alcaraz, who routed 15th-seeded Roberto Bautista Agut 6-2, 6-0 in an all-Spanish showdown.