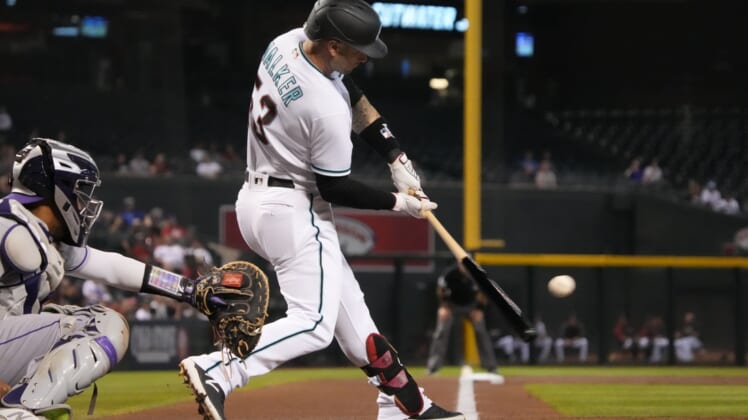 David Peralta drove in the winning run when he was hit by a pitch with the bases loaded in the bottom of the ninth, and the Arizona Diamondbacks beat the visiting Colorado Rockies 4-3 in Phoenix on Tuesday night.

Peralta also doubled, and Stephen Vogt had two hits for the Diamondbacks. Closer Joakim Soria (1-3) pitched the top of the ninth to get the victory.

Brendan Rodgers had two hits for Colorado, which lost for the ninth time in 10 road games and dropped to a major-league-worst 6-32 away from home.

Daniel Bard (4-5) started the ninth inning by giving up a single to Vogt and walking Daulton Varsho. Nick Ahmed lined out to center, but Bard then walked Josh Rojas.

Bard then hit Peralta just above the left knee to drive in Stuart Fairchild, who made his major league debut as a pinch runner for Vogt.

The Diamondbacks wasted no time in getting on the board in the first inning. Rojas hit the first pitch from Jon Gray for a double to center field, and Peralta followed with a double to left to score Rojas.

Eduardo Escobar and Christian Walker followed with doubles to put Arizona ahead 3-0.

Gray settled down to allow just three more baserunners. He gave up three runs on six hits and struck out eight in six innings.

Colorado began to chip away at the deficit against starter Merrill Kelly. With two outs in the fourth, Charlie Blackmon hit a sharp single to right, and Rodgers drove him in with a double for the Rockies’ first run.

Colorado got another run in the fifth when C.J. Cron led off with a single, moved to second on a groundout and scored on Raimel Tapia’s single to left.

Kelly left with one out in the sixth after allowing two runs on six hits.

The Rockies got even in the seventh. Elias Diaz led off with a walk, pinch hitter Garrett Hampson followed with a single and both moved up a base on Tapia’s sacrifice bunt. Diaz scored on a groundout by Yonathan Daza to tie it.