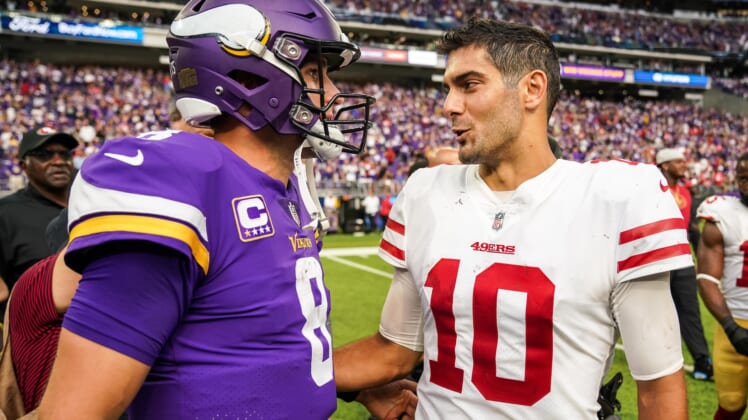 NFL quarterbacks make a ton of money, including guys who just aren’t all that great, because teams are desperate in their search for a franchise leader.

That’s the topic we’re exploring here as we dive into the nine most overpaid NFL quarterbacks in the league right now.

Cousins puts up big-time stats, without a doubt. He also has a penchant for playing poorly in big games, which is why he sports an abysmal record against teams with a winning record. Despite that, the Vikings paid Cousins $84 million, fully guaranteed, ahead of the 2018 season. Not only did the team take a step backward, but the 2017 championship contenders failed to even make the playoffs.

Desperate to find a solution to their quarterback woes, the Jaguars broke the bank this March and gave Foles a four-year, $88 million deal with a staggering $50.1 million guaranteed. The career journeyman has certainly showed some magic during clutch moments for the Philadelphia Eagles the past two years. Yet he’s also been decidedly mediocre during other stretches of his seven-year career.

Through four years as a pro, Mariota has proved one thing: He’s likely to be injured at some point every single season. Yet the Titans have saddled themselves with his fifth-year option for the 2019 season, which pays him nearly $21 million — ranking sixth in the NFL for quarterback salaries this coming season. Even when healthy, Mariota has been utterly mediocre the past two seasons, throwing 24 touchdowns and 23 interceptions.

It wasn’t that long ago that the Raiders made Carr the richest quarterback in NFL history. Obviously that record has been broken multiple times. Yet Oakland is still on the hook for $22.5 million in 2019, and $27.4 million total, at this point in Carr’s contract. Since his leg injury at the end of the 2016 season, he has seemingly taken a step back in his development and had a lackluster 2018 campaign in his first year with Jon Gruden.

This one’s a bit depressing, because Smith was coming off a stellar 2017 campaign when he signed his big deal with Washington. Then, of course, he broke his leg in gruesome fashion last year and isn’t likely to play at all in 2019. Smith will be paid $15 million this year, and Washington is on the hook for a staggering $42 million overall, including $32 million next season.

After being replaced by rookie Lamar Jackson last year, Flacco was traded to Denver during the offseason and figures to be the shoo-in starter for a Broncos squad that has fallen on hard times in recent years. He’ll make $18.5 million in 2019. That’s not an outrageous amount for a starting quarterback The issue here is that it’s highly debatable whether Flacco is worthy of being a starter any more. Since his miraculous 2012 campaign, he’s been the opposite of elite, throwing 110 touchdowns and 80 interceptions.

Manning is 38 years of age and has progressively become less and less mobile in recent years. He’s never been an elite passer but has helped New York win two Super Bowl titles, and that clout remains potent to this day. The bottom line is he’s a below-average NFL starter now, yet the Giants are set to pay Manning $23.2 million this season and continue to kick the can down the road when it comes to a backup plan.

Like Mariota, Winston is about to be paid in a big way playing out his fifth-year option with the Bucs in 2019. Talent has never been an issue. The big problem Winston has dealt with throughout his career — both at the collegiate and NFL levels — is that he turns the ball over at an alarming rate. Facing a make-or-break season, the fifth-year starter needs to prove he can take care of the ball. If that doesn’t happen, then Tampa Bay will likely be in the market for a new quarterback next year.

Garoppolo’s inclusion on this list stems from the fact he’s never really proved he’s worth all the money San Francisco threw his way. Including the $19.35 cap hit he carries in 2019, he’ll have cost the 49ers $62.35 million for his first two full seasons with the club. Last year, he played in less than three full games before tearing his ACL and missing the rest of the season. Needless to say, he has a lot to prove.