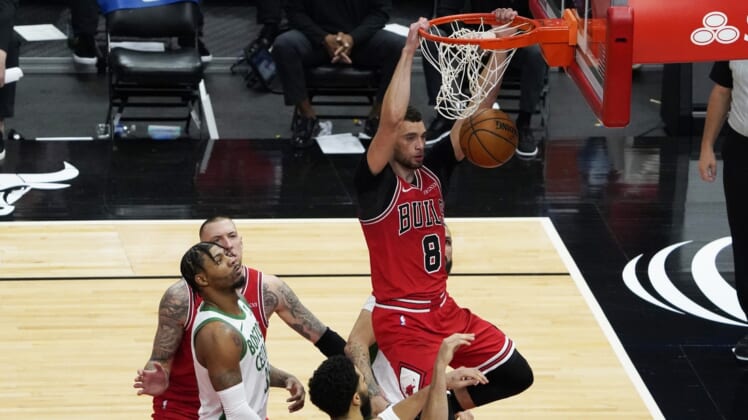 Nikola Vucevic scored 18 points, grabbed 14 rebounds and dished 10 assists to record his fourth career triple-double, and the host Chicago Bulls cruised to a 121-99 win over the Boston Celtics on Friday night.

Vucevic became the first Chicago player to log a triple-double since Jimmy Butler accomplished the feat on April 6, 2017, at Philadelphia.

Chicago’s Coby White finished with 25 points on 9-for-16 shooting, including 7-of-12 success from beyond the 3-point arc. Zach LaVine also scored 25 for the Bulls (28-39), who won for the second time in as many nights after dropping their previous four games in a row.

Kemba Walker scored a season-high 33 points to lead Boston (35-32). Evan Fournier contributed 17 points on 7-of-11 shooting, but Jayson Tatum made only 3 of 15 shots from the field and finished with nine points.

The Bulls put the game away with a 12-0 run to grab a 112-92 advantage with 3:02 remaining. LaVine buried a 3-pointer to cap the run, which followed a push by the Celtics to cut the deficit to eight points with 5:19 to go.

The Celtics opened the fourth quarter on an 8-0 run to pull within 94-82. Daniel Theis broke the Bulls’ scoring drought with a basket with 8:31 remaining.

Chicago led by as many as 21 points late in the third quarter. A driving layup by Thaddeus Young put the Bulls on top 91-70 with 49.6 seconds left, but Boston responded with a free throw by Tristan Thompson and a 3-pointer by Walker to pull within 17.

After Walker was called for a technical foul, Lauri Markkanen closed the fourth quarter with three free throws to make it 94-74.

The Bulls held a 60-46 lead heading into halftime.

Chicago closed the second quarter on a 21-12 run to take control. White drained a trio of 3-pointers during the scoring outburst, with Vucevic assisting on two of the baskets and Young assisting on another.

The Celtics led 28-25 after a layup by Luke Kornet with 1:29 left in the first quarter, but the Bulls scored the next five points on a 3-pointer by Javonte Green and a jump shot by Tomas Satoransky to take a 30-28 lead at the end of the first quarter.

The Bulls played in front of fans on their home court for the first time since March 10, 2020.