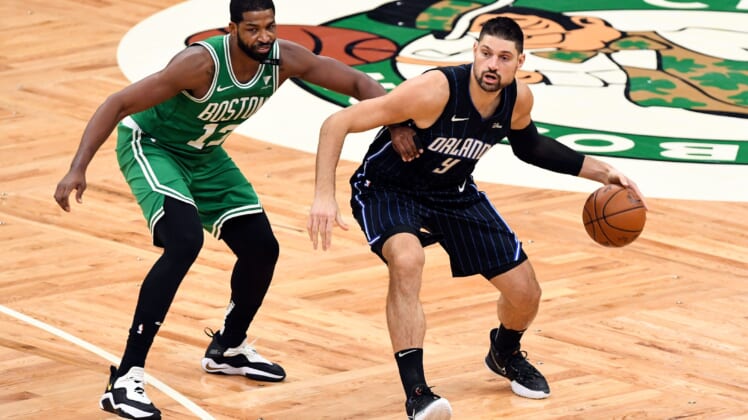 Orlando Magic All-Star center Nikola Vucevic continues to toil away for a franchise that seems stuck as a fringe playoff contender in the Eastern Conference. As the NBA trade deadline approaches, he’s sure to be a hot commodity, and it’s been revealed recently that the Boston Celtics are among the teams interesting in acquiring Vucevic.

Given the fact that the Magic still have Vucevic under contract for two seasons after this one, it wouldn’t be ideal to get rid of him. However, Boston could make a convincing enough offer to swing a huge trade that might vault the C’s into championship contention.

According to The Ringer’s Kevin O’Connor, the Celtics have “significant interest” in trading for Vucevic.

The 30-year-old veteran is averaging a career-high 24.6 points, along with 11.7 boards and 3.7 assists this season. Vucevic probably wants to see things through in Orlando, yet with the team on a seven-game losing streak as of this writing, the Magic should be in fire sale mode at the deadline. Even if Markelle Fultz and Jonathan Isaac were healthy, they’re a long way off from being a threat in the East.

Boston is too perimeter-oriented on offense right now, which sounds strange to say in the modern NBA, but then there’s the issue of personnel and how the best players are utilized on that end of the court.

Jayson Tatum and Jaylen Brown are improving as playmakers and are both averaging four assists for the first time in their careers. That said, they’re still primarily isolation-based players who create their own shots. The same is true for point guard Kemba Walker, who’s much more in the mold of a hybrid scorer than pure distributor.

With Tatum, Brown and Walker all defaulting too often to isolation sets, it doesn’t leave a lot of latitude for creativity from the Celtics’ other offensive players. Marcus Smart is also a purely defensive specialist whose shooting has improved incrementally over time, yet he’s hardly a dead-eye consistent shooter.

The way Boston can solve this is to acquire someone like Vucevic at the trade deadline.

How a Nikola Vucevic trade to Boston Celtics might look

Using the TradeNBA.com machine, this deal is a success. Because Boston spent many years stockpiling draft choices and now have the star core in place to win a championship, there’s no need to get precious about first-round picks.

Meanwhile, Orlando has enough trouble as it is drawing top-tier talent in free agency. The more leverage they have in the draft, there are, to make a cross-sports analogy, more cracks at the plate to find the next rookie steal. Even if the first-round selections from the Celtics aren’t particularly high, the philosophy still makes sense.

Thompson is also much more of a defensive big, and because he can’t space the floor as a 3-point shooter, he just clogs the lane and makes the Celtics’ whole awkward hero ball situation even worse.

The other great thing about Thompson is how versatile and dynamic he’d make Orlando’s frontcourt. Between Isaac, Thompson, Mo Bamba and Aaron Gordon, there’s a lot of athleticism and fascinating combinations in terms of how to deploy that platoon. Thompson also has an expiring contract next season, so there’s flexibility in terms of what the Magic would do with him.

Vucevic is thriving as a 3-point marksman in 2020-21, hitting at a 41.3% clip on 6.4 attempts per contest. He’s also not as bad on defense as advertised, and with such great perimeter defenders in Smart and Brown already in the fold, along with Daniel Theis and Robert Williams to patrol the paint, Celtics coach Brad Stevens has plenty to work with to deploy his system and get strong results.

This blockbuster trade makes sense for both sides, and let’s be honest, seeing a talent like Vucevic shining in a big basketball market like Boston is a win for all NBA fans outside of Orlando. Although the Magic faithful would be sad to see him go, the massive haul from Vucevic’s departure sets them up for either a superstar trade, or enhances their chances of unearthing a bargain All-Star in the NBA Draft.