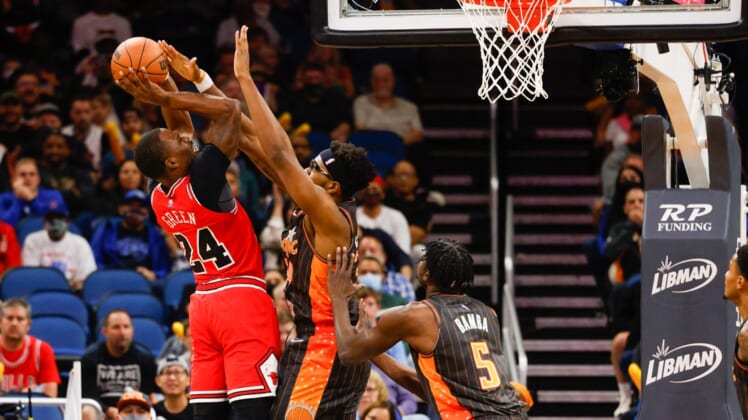 DeMar DeRozan scored 17 of his 23 points in the second half and Nikola Vucevic had 16 points and eight rebounds in his return to Orlando, helping the Chicago Bulls break a two-game losing streak with a 123-88 victory over the Magic on Friday night.

Chicago’s Coby White, playing his seventh game of the season, came off the bench to score a season-high 20 points on 9-for-11 shooting. Lonzo Ball finished with 13 points, six assists and five steals.

DeRozan totaled 12 points during Chicago’s 35-point third quarter as the Bulls extended a nine-point halftime advantage to 90-69 entering the final 12 minutes. On the night, DeRozan went 3-for-3 from beyond the arc and made all six of his free-throw attempts.

Vucevic, who played nine seasons in Orlando and is the franchise’s all-time leader in made field goals (4,490) and the second-leading rebounder (6,381), made seven of his 13 shots to go along with three assists.

The two-time All-Star was traded to Chicago in March as part of a deal that sent former Bulls lottery pick Wendell Carter Jr. to the Magic.

Carter scored 18 of his season-high 26 points in the first half on Friday and cleared 10 rebounds. He made 8 of 15 field-goal attempts and converted eight free throws out of a career-high 10 attempts.

Franz Wagner added 15 points and five rebounds for Orlando, which lost its fifth consecutive game. Jalen Suggs finished with 14 points, but 7-foot center Mo Bamba was limited to four points and six rebounds after briefly exiting late in the second quarter with back spasms.

Chicago outscored the Magic 28-19 in the second quarter for a 55-46 halftime lead. The Bulls opened the period with a 16-0 run — capped by White’s 3-pointer at the 8:18 mark — as Orlando missed its first five shots and committed four of its 15 turnovers.

The Magic, wearing their new orange-themed Nike NBA City Edition uniform for the second straight home game, dropped to 1-8 at the Amway Center.