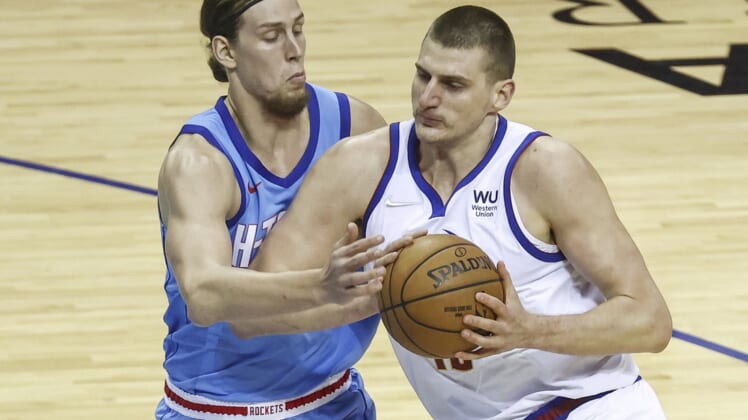 Nikola Jokic posted his 50th double-double of the season while Michael Porter Jr. scored 21 points as the Denver Nuggets rolled to a 128-99 road win over the Houston Rockets on Friday.

Jokic finished with 29 points and 16 rebounds while adding seven assists and two steals to pace the Nuggets, victorious in two games since guard Jamal Murray was lost to a season-ending left ACL injury. Jokic finished 10-for-12 from the floor to pace a Denver offense that shot 49.5 percent overall.

Porter chipped in 4-for-7 3-point shooting plus five rebounds and was critical to the Nuggets’ fast start. He drained two 3s during a 14-2 run that gave Denver its first double-digit lead at 18-7 early in the first quarter. The final margin represented the largest lead for the Nuggets.

The Rockets, losers of five in a row and 10 of 11, tried to hang tough. Jae’Sean Tate enjoyed a breakout opening period with 11 points, five rebounds and three assists and nailed consecutive 3s along with Avery Bradley that pulled Houston to within 27-23.

But Denver stretched its lead to 35-28 by the close of the period and reclaimed a double-digit edge in the second thanks in part to veteran forward Paul Millsap, who started 4-for-4 and grabbed four boards early off the bench.

The Nuggets followed a 3-pointer from Rockets forward Kelly Olynyk with a 9-2 run that capped the first half, capitalizing on two late turnovers by Houston guard John Wall to build a 69-49 halftime lead.

The Nuggets shot a robust 55.3 percent prior to the intermission despite missing 13 of 17 from 3-point range. Denver converted 10 first-half Rockets turnovers, seven from Wall, into 14 points.

Houston clawed to within 73-59 early in the third quarter before Jokic took over, scoring 12 points in the period to snuff the Rockets once and for all.

Millsap finished with 11 points and 10 boards as three Nuggets reserves scored in double figures, including Jeff Green with 13 and P.J. Dozier with 11. Will Barton added 12 for the Nuggets.

Olynyk led the Rockets with 23 points while Tate added 21 on 9-of-13 shooting.