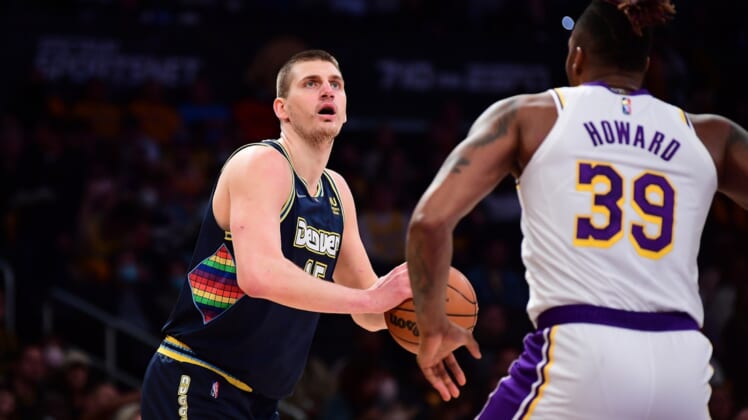 Jokic is an overwhelming favorite to repeat as MVP as the Denver Nuggets complete the regular season with a home game against the disappointing Los Angeles Lakers on Sunday night.

The soaring Nuggets (48-33) have won 20 of their past 29 games and could claim the fifth seed for the Western Conference playoffs with a victory Sunday and a loss by the Utah Jazz. The teams share the same record but the Jazz hold the tiebreaker edge by virtue of a 4-0 series sweep this season.

Denver has been receiving stellar play from Jokic, who has scored at least 35 in each of the past five games. He is averaging 37.8 points during the streak.

Also, he became the first player in NBA history to record 2,000 points, 1,000 rebounds and 500 assists in a season during Thursday’s 122-109 victory over the visiting Memphis Grizzlies. He had 35 points, 16 rebounds, six assists and four steals during a triumph that clinched a playoff spot for the Nuggets.

Denver coach Michael Malone has no doubts who the MVP is during a season in which star guard Jamal Murray (ACL) hasn’t played and standout forward Michael Porter Jr. (back) has been sidelined since early November.

“The MVP isn’t even a competition,” Malone insisted. “There’s other great players, I’m not saying they’re not great players. But what Nikola Jokic has done this year with this team — everything we’ve had to go through — is just incredible.”

Jokic has a career-best 19 triple-doubles this season, topping last season’s 16.

The one thing he says he won’t do is lobby for the award.

“If that’s enough, it’s enough,” Jokic said of his stats and credentials. “If not, you cannot control that.”

Jokic averaged 27.5 points, 15 rebounds and 9.5 assists in two Denver victories over the Lakers earlier this season. The Nuggets steamrolled visiting Los Angeles 133-96 on Jan. 15 and posted a 129-118 road win last Sunday. Jokic had 38 points, 18 rebounds and six assists in the recent triumph.

The Lakers (32-49) were eliminated from play-in consideration on Tuesday and have to be considered one of the most disappointing teams in NBA history.

Los Angeles snapped an eight-game losing streak with a 120-101 home win over the lowly Oklahoma City Thunder on Friday night. It was the club’s first victory since defeating the Cleveland Cavaliers 131-120 on March 21.

The trio of LeBron James (ankle), Anthony Davis (foot) and Russell Westbrook (shoulder) didn’t play Friday and will also sit out the finale. They played together just 21 times as James and Davis battled injuries. Westbrook didn’t mix well with the club during his first and possibly only season in Los Angeles.

James averaged 30.3 points in 56 games but won’t qualify for the scoring title. A player must play in at least 58 contests during an 82-game season.

Sunday’s game also could be the final one for Lakers coach Frank Vogel. He has one season remaining on his contract but speculation is running rampant that he won’t be invited back.

Vogel was just happy to be discussing a victory after Friday’s game.

“There’s a lot of joy in basketball that hasn’t been there this year because of what we were competing for and how we were falling short,” Vogel said. “It was just good to enjoy a W.”

Stanley Johnson scored a season-best 21 points on Friday as the Lakers won for just the sixth time in their past 27 games.