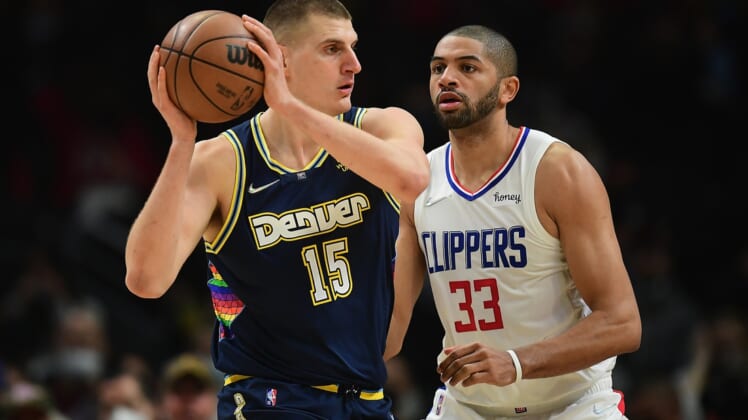 The Denver Nuggets get not one, but two shots at the Golden State Warriors without defensive ace Draymond Green when the clubs open a home-and-home sequence Tuesday night in San Francisco.

The Western Conference hopefuls, who have yet to meet this season, also will get a rematch Thursday at Denver.

Green entered the NBA’s health-and-safety protocols over the weekend, joining teammates Jordan Poole, Andrew Wiggins, Damion Lee and Moses Moody. Golden State hopes to get Poole, their third-leading scorer at 17.0 points per game, back for the sequence opener after he’s missed the last five games.

Golden State also has been without Andre Iguodala, who is nursing a sore right knee, as well as Klay Thompson (Achilles) and James Wiseman (knee), both of whom are scheduled to make season debuts in January.

The Defensive Player of the Year candidate has more than held his own against Denver’s reigning Most Valuable Player Nikola Jokic in the past, helping limit him to an average of 15.2 points in 20 career head-to-heads.

During his MVP run last season, Jokic was held to one double-double and one single-double in two losses at Golden State, shooting 17-for-37 overall and 1-for-8 on 3-pointers.

Green outrebounded (19-18) and out-assisted (26-14) the triple-double machine in those two games.

Without Green, the Warriors will have to count more upon Otto Porter Jr., who came up big in the Phoenix game with 19 points, including seven straight in a late Golden State spurt.

“Otto was great,” Warriors coach Steve Kerr assessed after the win, which temporarily allowed the Warriors (27-6), with a third straight win, to pass the Suns (26-6) for best record in the league. “He’s just added so much to our team with his shooting from that position and his rebounding and defense.”

The Nuggets, who have lost two of their last three, aren’t without issues of their own. Aaron Gordon has missed the last two games with a hamstring injury, while Jamal Murray (knee) and Michael Porter Jr. (back) are out indefinitely.

Jokic has been a one-man wrecking crew in Denver’s last two games, putting up 29 points and 21 rebounds in a home loss to the Charlotte Hornets last Thursday before 26 points and 22 rebounds in a 103-100 road win over the Los Angeles Clippers on Sunday.

He is the first player to have back-to-back, 20-point and 20-rebound games since Andre Drummond in January 2020.

Austin Rivers contributed 12 points in a rare start and newcomer Davon Reed chipped in with 15 off the bench against the Clippers as the Nuggets, according to coach Michael Malone, are finally getting to know one another.

“It’s almost becoming a sense of normalcy with what we’re dealing with, which is scary,” Malone observed. “This is getting really crazy, and it’s not going away.”