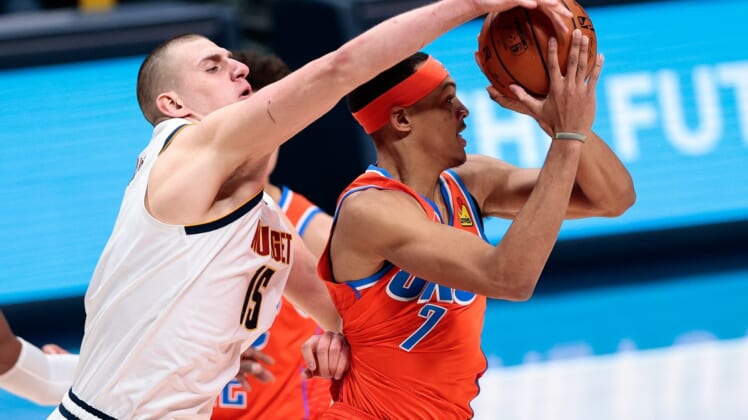 Nikola Jokic is getting some early season buzz as an MVP candidate, and with good reason. The Denver Nuggets star is averaging a triple-double 14 games into a 72-game schedule, and he is flashing improved defense and dunking ability.

“It’s just like watching a surgeon pick somebody apart,” Denver coach Michael Malone said. “Nikola is a first-ballot Hall of Famer. He is the best center in the world.”

Jokic will be tested when the Nuggets play the Phoenix Suns on Friday night, the first of two straight days of playing in Phoenix. The Suns are led by Devin Booker, but Deandre Ayton is showing why he was the first overall pick in the 2018 draft.

The 22-year-old Ayton is averaging 13.9 points and 12.1 rebounds a game and is coming off a season-highs in points (26) and rebounds (17) in a win over Houston on Wednesday night.

Big nights like the one against the Rockets are becoming expected with Ayton, and his veteran teammate Chris Paul said criticism of the center is to get more out of him.

“Everybody on this team is so hard on him because we know what he’s capable of,” Paul said. “To be one of the greats in our league, you just have to have consistency and he’s more than capable of it.”

Friday will be the third game for Phoenix after having three postponed due to contract-tracing concerns after playing the Washington Wizards on Jan. 11. It will also be the second game against Denver this season. The Suns won on the road, 106-103, on New Year’s Day.

That was the first game the Denver Nuggets were without Michael Porter Jr. Porter has not played since Dec. 29 because of coronavirus issues. At first, he was quarantined for contact-tracing concerns and was expected to return Jan. 7 against Dallas but was ruled out before the start. Later, Malone said Porter had contracted COVID-19.

Denver expects him to return on the five-game road trip that starts in Phoenix, possibly as early as Friday. However, Porter has to clear some return-to-play protocols before he can be cleared to play.

When Porter returns it likely means Will Barton will again come off the bench. Barton has started the last 10 games, with the Nuggets going 6-4 in that span. Porter’s return will bolster an offense that at times has had a hard time finding options other than Jokic, Jamal Murray and Barton.

Porter, averaging 19.5 points in four games, will inject some energy into the lineup.

“Once he gets to gel with us and we get that chemistry with him, I think we’ll be unstoppable,” JaMychal Green said.

Porter can also take some of the burden off Murray, who has been dealing with a bruised right elbow. In Denver’s win over Oklahoma City on Tuesday night Murray had just five points and at one point discarded the elbow sleeve he was wearing.

Malone said he would like to give Murray and Jokic some time off, but with the upcoming schedule and the importance of the games it is difficult to find time.

“Five games in (eight) days, it’s really hard to do that,” Malone said.