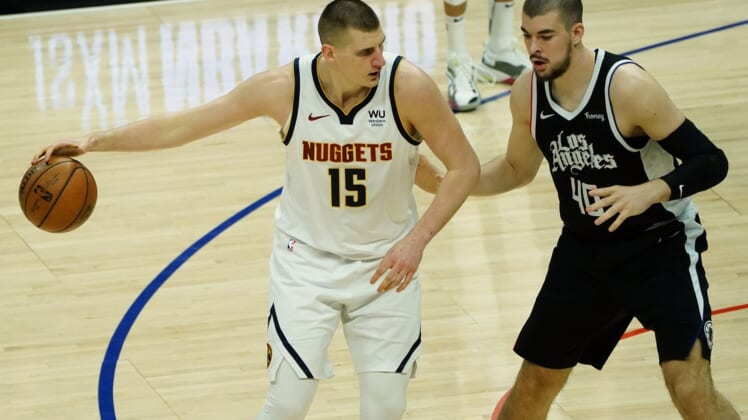 Nikola Jokic made another statement in his MVP candidacy, leading the Denver Nuggets to a 110-104 road win over the Los Angeles Clippers on Saturday.

With the win, the Nuggets (43-21) overtook the Clippers (43-22) for the third spot in the Western Conference by a half-game. Denver also finished with a 2-1 season-series advantage over Los Angeles, earning a potential tiebreaker.

Kawhi Leonard returned to the starting lineup for the Clippers after a five-game absence. Leonard, who had played just one game over the past three weeks due to a sore right foot, finished with 16 points and six assists.

Paul George led Los Angeles with 20 points but he struggled to put the ball in the basket, finishing 5-for-21 from the field. Rajon Rondo added 18 points and five assists off the bench, and DeMarcus Cousins contributed 16 points in 14 minutes.

The Clippers opened the game making their first seven shots and grabbed an early 11-point lead. Los Angeles held a 28-27 advantage at the end of the first quarter.

However, the Nuggets outscored the Clippers 56-45 over the next two quarters, and Denver led by 10 points at the end of the third quarter. Los Angeles managed to cut the deficit to three points with just over two minutes left but could get no closer.

The Nuggets are riding a five-game winning streak — the longest active run in the NBA — and have won nine of their past 10 games.

Denver star Jamal Murray attended the game at Staples Center. Murray sustained a torn ACL in his left knee on April 12 and underwent season-ending surgery. The Nuggets are 9-1 without him.

The Clippers matched their longest losing streak of the season, three games. They will try to get back on track Tuesday when the Toronto Raptors visit.

The Nuggets stay in Los Angeles to oppose the Lakers on Monday.