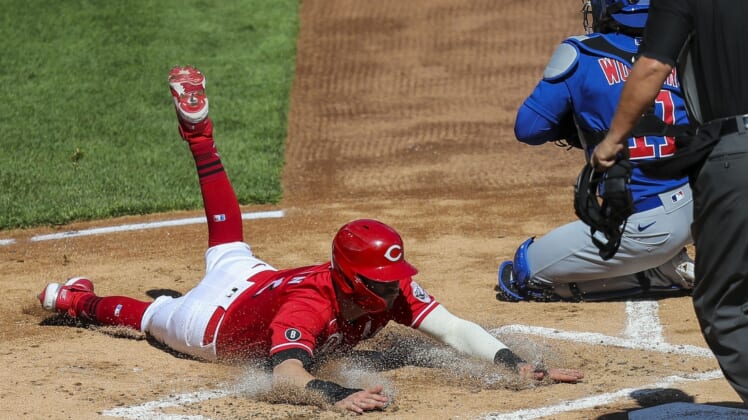 Nico Hoerner reached base four times and singled in the go-ahead run in the sixth inning as the visiting Chicago Cubs evened the three-game series against the Cincinnati Reds with a 3-2 victory on Saturday.

Rex Brothers (1-0) struck out the side in the fifth inning and Craig Kimbrel stranded two baserunners in the ninth for his fifth save as Chicago won for the second time in its last eight games.

Tyler Stephenson had two hits for Cincinnati, which dropped to 3-9 over its last 12 games. The Reds had two on with no outs in the ninth before Kimbrel struck out Alex Blandino and Tyler Naquin. Nick Castellanos then grounded out to end the ballgame.

The Reds took an early lead when Naquin doubled off Zach Davies to lead off the first inning, Castellanos followed with an infield single, and Naquin scored on a throwing error by third baseman David Bote.

Castellanos then scored on a sacrifice fly by Mike Moustakas to give the Reds a 2-0 lead against Davies, who worked out of bases-loaded jams in the third and fourth innings.

Davies allowed two runs (one earned) over four frames and drove in the Cubs’ first run when his sacrifice bunt scored Hoerner, who doubled to begin the third inning.

Chicago pulled even in the fourth when Bote doubled with two outs and scored on Jason Heyward’s single off Luis Castillo (1-3), who gave up three runs on eight hits over 5 1/3 innings.

Javier Baez extended his hitting streak to seven games with a leadoff single in the sixth against Castillo. Sean Doolittle replaced Castillo with two on and one out and yielded a run-scoring single to Hoerner, who went 3-for-3 with a walk and stolen base.

Tempers flared in the top of the eighth after Anthony Rizzo struck out against Reds reliever Amir Garrett, who pounded his chest and drew an immediate reaction from the Cubs. Both benches cleared briefly, but no players were ejected.