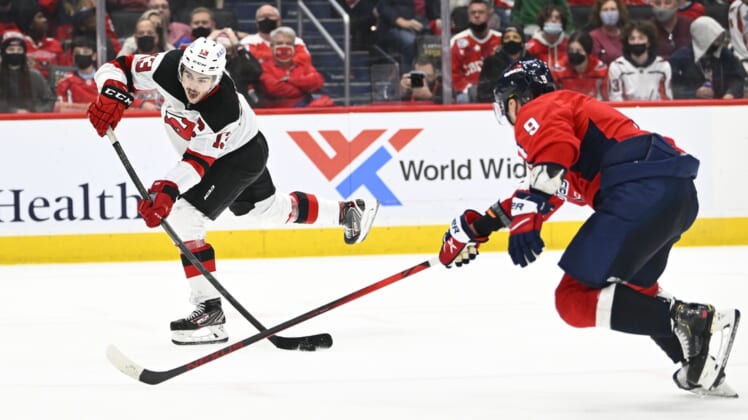 Nico Hischier scored his second goal of the game with 2:04 left in overtime for the visiting New Jersey Devils, who capped a successful weekend with a 4-3 win Sunday afternoon over the Washington Capitals.

Jack Hughes grabbed a loose puck deep in the Capitals’ zone and dished to Hischier, who fired a shot into the far corner of the net to rescue the Devils from a potentially frustrating loss. New Jersey squandered a two-goal lead late in the third, when Nic Dowd and Conor Sheary scored in a span of fewer than three minutes for Washington.

Yegor Sharangovich and Damon Severson scored in the first while Hischier scored in the second for the Devils, who beat the Edmonton Oilers 6-5 in overtime Saturday.

Goalie Mackenzie Blackwood made 27 saves as New Jersey tied a season high by winning its third straight overall. The Devils, who won three in a row from Nov. 6-11, went 3-12-3 in between the three-game streaks.

John Carlson scored in the first for the Capitals, who had a two-game winning streak snapped. Goalie Ilya Samsonov recorded 33 saves.

Sharangovich, whose goal in the final minute Saturday forced overtime against the Oilers, scored 7:15 into the first and Severson doubled the lead just 74 seconds later. The Capitals cut the gap in half with 46.6 seconds left in the period, when Carlson took a drop pass from Michael Sgarbossa and fired a shot over Blackwood’s left shoulder.

The Devils wasted little time regaining their two-goal lead just 22 seconds into the middle period, when Hischier reached his stick out to redirect a shot by Severson.

The Capitals forced overtime with their late two-goal flurry in the third. Dowd caught up to a loose puck near the Devils’ net and batted the puck twice, with the second attempt fluttering past Blackwood with 6:38 left.

A turnover by Blackwood led to Sheary’s game-tying goal with 3:47 remaining. Lars Eller picked off Blackwood’s clearing pass and dished to Sheary, who scored into a nearly empty net.