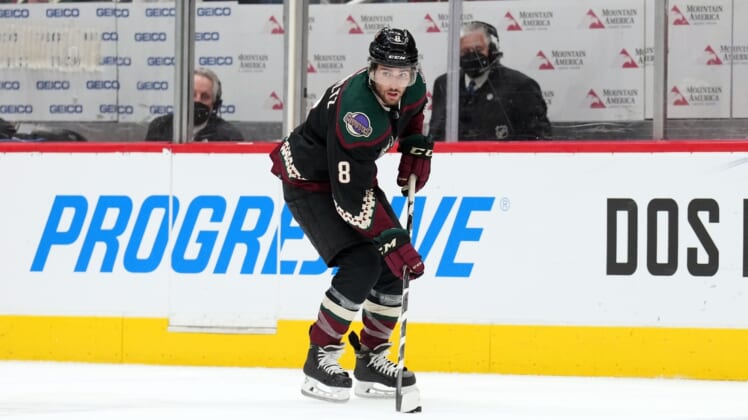 Nick Schmaltz enjoyed the night of his professional life earlier this month after scoring a franchise-best seven points in the Arizona Coyotes’ 8-5 victory over the Ottawa Senators.

Schmaltz will look to continue his good fortune on Monday night when the clubs meet for the rematch in Ottawa.

“It was pretty crazy during the game,” Schmaltz told Arizona Sports recently after reflecting on his two-goal, five-assist performance March 5.

Schmaltz hasn’t slowed much, either.

The 26-year-old had an assist on Clayton Keller’s team-leading 25th goal late in the second period of Saturday’s 3-2 road setback to the Boston Bruins. Schmaltz has five goals and nine assists during his five-game point streak, while Keller has four and six, respectively, during his five-game run.

Keller recorded two goals and two assists in the previous clash with the Senators.

Rookie defenseman Dysin Mayo also picked up an assist on Keller’s tally Saturday to carry a four-game point and assist streak into the encounter vs. Ottawa.

Another Arizona defenseman, Jakob Chychrun, came away with a lower-body injury during a collision with Bruins blue-liner Derek Forbort in the second period of Saturday’s game. Chychrun flew back to Arizona to be examined by team doctors, according to multiple reports, but the injury is not believed to be serious.

“We miss him out there,” Coyotes coach Andre Tourigny said. “He’s on fire, he’s playing well for us. … It’s tough, especially quality minutes like Chych has been playing lately.

“(Head trainer Dave Zenobi) doesn’t think it’ll be that long. We talked — hopefully day-to-day or something like that. I don’t have the final say from the medical staff, but (Zenobi) was somehow positive, so hopefully he’s right.”

The Senators suffered their sixth loss in eight games with a 6-3 setback to the Chicago Blackhawks on Saturday. Minutes-eating defenseman Thomas Chabot scored to give Ottawa a 2-0 lead in the first period.

“After the first period, I thought we were on top of them, we weren’t giving them any time or space, we score some goals,” Chabot said. “After that, for some reason, we let down a little bit, they got a few goals, and then we tried to (play) catch-up.”

Chabot recorded three of his team-leading 27 assists in the previous encounter with the Coyotes.

Parker Kelly’s availability for Monday’s game might come into question after he administered a hit on Connor Murphy that resulted in the Blackhawks’ defenseman leaving the ice on a stretcher Saturday with an upper-body injury. Kelly could end up hearing from the NHL’s Department of Player Safety, but Canada’s TSN reported Sunday that as of now, there weren’t any hearings scheduled on the matter as of yet.

“It’s unfortunate. I went and saw Parker after the first period and he was down,” Senators coach D.J. Smith said. “He’s a guy that plays physical, but he’s not ‘that’ guy. (Murphy) went down the wall; his job is to take him and take him hard.

“(Murphy) kind of turned, and it’s too late at that point. He was coming back with some speed, and it’s unfortunate.”