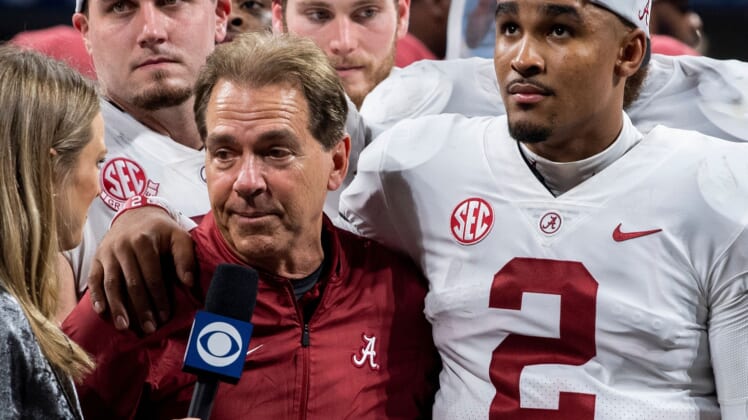 When Jalen Hurts had the chance to transfer away from Alabama to Oklahoma following the 2018 season, Nick Saban helped him make his choice.

Hurts ultimately opted to transfer to Oklahoma. He had a stellar season for the Sooners. Then, Hurts was stunningly drafted by the Philadelphia Eagles with the 53rd overall pick.

That series of events was at least in part aided by Saban.

Saban shared that he helped Hurts see how Oklahoma would be the best choice for him. Before choosing the Sooners, he was considering Oklahoma, Miami and Maryland as his top transfer options.

Before Hurts chose Oklahoma, many expected him to go to Maryland because of his connection with Locksley.

Saban to Hurts: Oklahoma has the better players

Saban explained in the interview how he helped Hurts see that the Sooners would be the team to join.

He elaborated on what he told Hurts to convince him to play for Lincoln Riley and the Sooners.

“I said ‘I’ve always told you quarterback is a hard position to play if you don’t have good players around you,’” Saban said in the interview with the Eagles. “’So, if I was you, in order to create the most value because you have one year to do it, if you know you can be the starter there, go where they have the best players.’

“That’s no disrespect to anybody else, the guys that worked here and did a great job here, it’s what’s best for you. That’s how you have to make this decision right now. He did it and I think did a great job for Oklahoma.”

Hurts ended up having a phenomenal season for the Sooners. He was the Heisman Trophy runner-up after racking up 5,174 yards and 53 touchdowns from scrimmage.

Now he’s a member of the Eagles as a second-round draft pick. And there are already some big expectations for him in Philly. It sure seems like Saban’s advice to Hurts paid off for the young man.