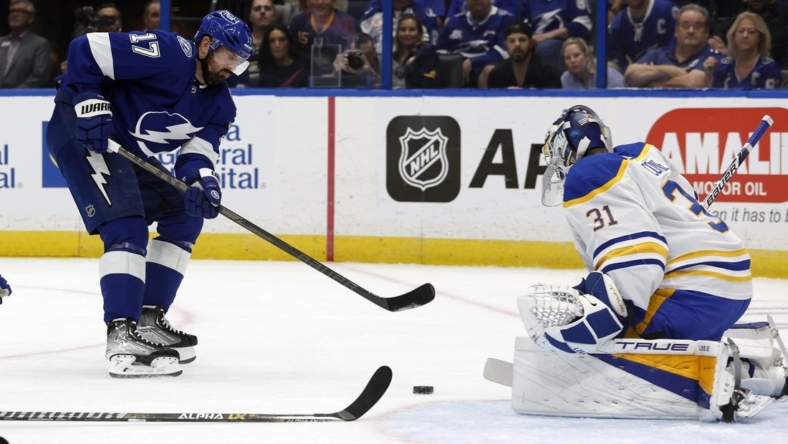 Kucherov sealed the victory with an empty-netter, his sixth goal, with 58 seconds left. His three assists and tally moved his point streak to 10 games and his goal streak to six.

Brandon Hagel scored and one assist for Tampa Bay. Brayden Point found the back of the net on the power play and had a helper, and Nicholas Paul scored. Elliott made 21 saves.

Playing on the second night of a back-to-back, the Sabres were without leading point producer Rasmus Dahlin (upper body, day-to-day) and fell to 1-9-1 in their past 11 games against Tampa Bay.

Paul and Victor Hedman — both hampered by injuries this week — led the charge early as the defenseman sent a feed to Paul, who fired in his fourth goal from the left circle at 7:07.

The Sabres tied it when Girgensons tallied on an odd sequence. He zipped a puck high over Elliott from the slot and gathered the bouncing puck off the glass for a second chance. The fourth-line left wing then potted his third goal at 16:24.

In the second period and on the Lightning’s second power play, Point took a pass from Steven Stamkos and buried his sixth goal at 5:05 for a 2-1 lead. But Mittelstadt matched it at 8:34 on a deflection of Power’s long shot on Buffalo’s third man advantage as the teams played to a 2-all tie after 40 minutes.

Comrie and Elliott were excellent in a fast-paced opening to the third, but the Sabres grabbed a lead when Alex Tuch connected with Skinner on a cross-ice pass. The top-line left wing went around Elliott and jammed in the puck to put Buffalo out front for the first time at 4:25.

However, Hagel knotted it at 3 by putting in his own rebound just over three minutes later — his fourth goal — with another assist from Kucherov.