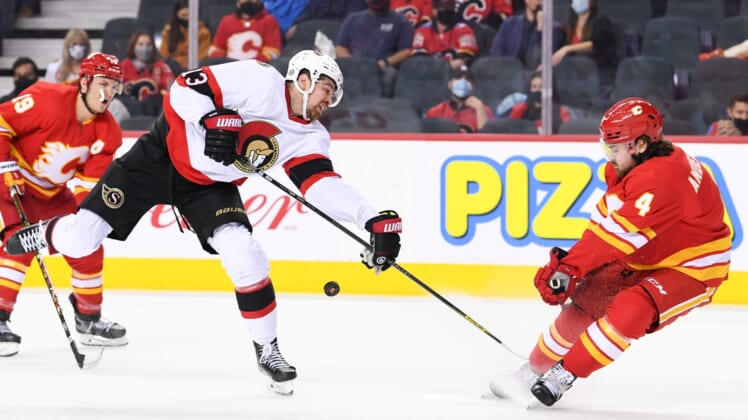 Nick Paul scored twice to lead the offensive attack and goaltender Matt Murray won for the first time this season as the visiting Ottawa Senators claimed a 4-1 victory over the slumping Calgary Flames on Thursday.

Connor Brown collected one goal and one assist and Drake Batherson tallied once for the Senators, who snapped a three-game skid in their first game since New Year’s Day. Murray, who has been plagued by injuries and inconsistency and lost his first six starts of the season, made 27 saves. Alex Formenton collected two assists.

Matthew Tkachuk scored for Calgary, which has lost four straight games and has just two wins in 10 outings. Goalie Jacob Markstrom, who has surrendered four or more goals in four of his last five outings, stopped 30 shots.

Paul opened the scoring just 103 seconds into the clash with the first of three goals created by a Calgary defensive-zone turnover. Formenton grabbed the puck before passing it to Nick Paul, who promptly ripped a shot home.

Paul’s second of the period doubled the lead at the 16:37 mark. Formenton stripped a puck from the Flames player, which was picked up by Brown, who slipped a pass to Paul as he raced to the net. He converted a backhand deke into the cage for his sixth goal of the season.

Batherson’s tally with 56.9 seconds remaining in the second period made it a three-goal edge. Brady Tkachuk intercepted a poor pass attempt to get the puck to Batherson, and he lifted a sharp-angled shot from beneath the right face-off circle for his 10th goal of the season.

Tkachuk finally gave the hosts a jolt of life when he put them on the board 47 seconds into the third period by deflecting Chris Tanev’s point shot for his 16th tally of the season.

However, Brown quashed any comeback hopes four minutes later when he found the five-hole spot on a breakaway to claim his fifth goal of the season and restored Ottawa’s three-goal lead.