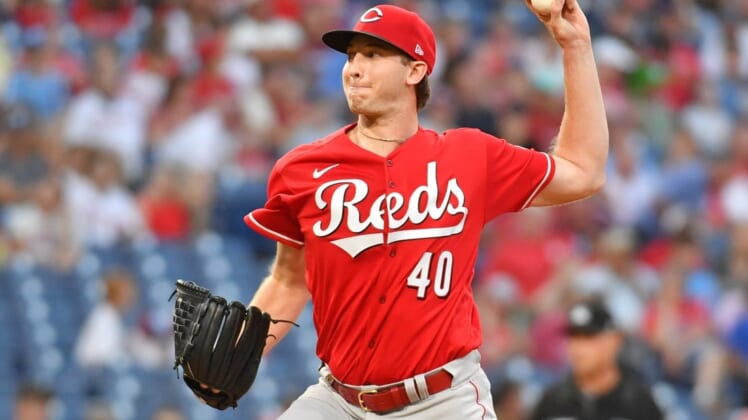 Nick Maton hit a walk-off RBI single to right field off Alexis Diaz with one out in the bottom of the ninth inning and the host Philadelphia Phillies rallied to defeat the Cincinnati Reds 7-6 on Tuesday.

The Phillies scored two runs in the ninth.

J.T. Realmuto hit a triple and drove in two runs and Matt Vierling homered for the Phillies, who won their second straight game.

Nick Castellanos and Alec Bohm each added an RBI single.

Brad Hand (3-1) picked up the win despite allowing two runs in the top of the ninth.

TJ Friedl had hit the go-ahead two-run triple off Hand in the top of the ninth.

Mike Moustakas hit a single, double and an RBI, Aristides Aquino added two hits and two RBI and Donovan Solano had three hits for the Reds.

Reds starter Nick Lodolo took a no-hitter into the sixth inning but wound up allowing three hits and four runs with five strikeouts and two walks in 5 1/3 innings.

Lodolo retired the first 11 Phillies before Bohm walked with two outs in the fourth. Realmuto was then hit by a pitch and Castellanos popped out.

Jonathan India doubled to open the sixth and advanced to third on a groundout by Nick Senzel. After Kyle Farmer walked, Moustakas hit an RBI single to right for a 1-0 lead. The Reds then added two more runs when Aquino and Jose Barrero were each walked with the bases loaded.

Edmundo Sosa doubled to open the sixth for the first Philadelphia hit off Lodolo. One out later, Rhys Hoskins walked and Sosa advanced to third on a wild pitch. Bohm hit an RBI single. Realmuto followed with a two-run triple to tie the game.

Castellanos then ripped an RBI single for a 4-3 advantage as he extended his hitting streak to 13 games in a row.

Vierling launched a solo homer in the seventh for a 5-3 lead.

In the eighth, Aquino lined an RBI double off Jose Alvarado to cut the deficit to 5-4. Alvarado rallied to then strike out the side.