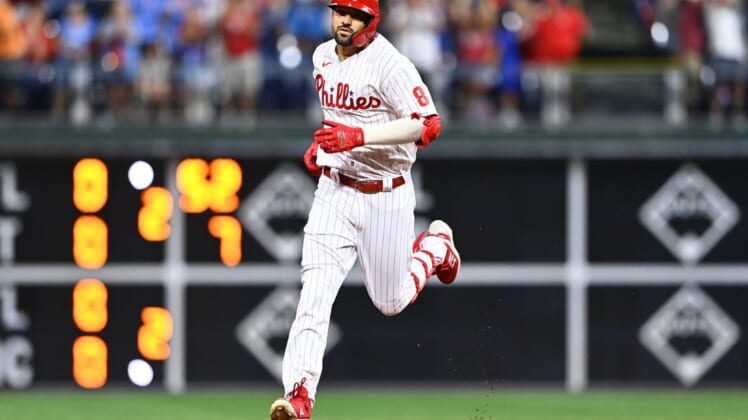 The Philadelphia Phillies clearly didn’t pout following one of their most frustrating losses of the season.

After a tough 10-9 defeat to the New York Mets on Sunday, the Phillies responded with a 4-1 victory over the Cincinnati Reds a day later. For a team searching for its first postseason berth since 2011, it was a big result coming off a tough series in which Philadelphia dropped three of four.

The Phillies will look for another victory when they host the Reds again on Tuesday.

“It feels great,” Phillies interim manager Rob Thomson said. “Like I said before, these guys bounce back. They really do. Their memory isn’t very long. They just keep grinding away.”

Nick Castellanos continued his torrid offensive stretch with a solo home run and an RBI double, extending his hitting streak to 12 games.

Castellanos, one of Philadelphia’s key offseason acquisitions, appears to be getting hot at the right time. With reigning National League Most Valuable Player Bryce Harper headed out on a rehab assignment beginning Tuesday at Triple-A Lehigh Valley, the Phillies’ lineup suddenly looks to be kicking into full gear.

“Great day, that was a long home run,” Thomson said of Castellanos’ 436-foot shot. “And then, a big double down the line.”

Philadelphia will hand the ball on Tuesday to Ranger Suarez (8-5, 3.31 ERA). In his last start, also against the Reds, Suarez allowed three hits and two walks while striking out eight in seven shutout innings.

In Suarez’s career against the Reds, he is 1-0 with a 2.20 ERA in six games, including two starts.

The Phillies optioned Darick Hall to Lehigh Valley following the Monday win, with a corresponding roster move due to come on Tuesday.

The Reds will look to rebound following a lackluster night on offense in the Monday loss.

Cincinnati managed only three hits and one run, which came on Austin Romine’s solo homer.

The Reds went 0-for-1 with runners in scoring position and four left on base. However, their bullpen turned out to be solid following two shaky innings by opener Luis Cessa, who gave up three hits and two runs. Joel Kuhnel, Art Warren, Ross Detwiler and Hunter Strickland combined to allow just two runs the rest of the game.

“Given the situation we were in, to only give up four runs is a pretty good job by our bullpen,” Reds manager David Bell said.

Rookie Nick Lodolo (3-4, 4.12 ERA) is scheduled to start for Cincinnati on Tuesday.

In Lodolo’s last start, which came against the Phillies on Wednesday, he tossed a career-best seven innings and gave up five hits and no runs with eight strikeouts and two walks.

“I was aggressive in the zone,” Lodolo said after the outing. “I felt I got better as the game went on. I was working through traffic the first three innings but it got better.”

Infielder Matt Reynolds left the Reds’ 9-5 victory against the Pittsburgh Pirates on Sunday with a hip injury in the seventh inning and was held out of the lineup on Monday. Reynolds’ status for Tuesday was unclear.