WATCH: Unreal scene as Nick Castellanos gets first hit as a member of the Philadelphia Phillies 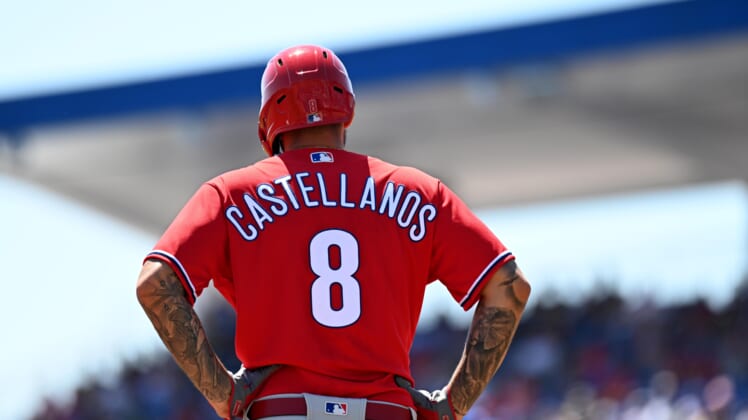 Announcers should know by now to simply avoid reading quotes or apologizing for their own behavior when Nick Castellanos is up at bat.

Just recently signed to a five-year, $100 million contract by the Philadelphia Phillies, Castellanos was able to get his first hit as a member of the team. It came during Sunday afternoon’s spring training game against the Toronto Blue Jays.

Like clockwork, Martinez talked about said arrest and gave us direct quotes from Blue Jays manager Charlie Montoyo about the incident. During the exchange, Castellanos recorded his first hit as a member of the Phillies.

Nick Castellanos is the gift that keeps on giving

Unless you’re completely void of social media or have been hiding under a rock the past few years, you know exactly where we are going with this.

Back in 2020, Cincinnati Reds broadcaster Thom Brennaman apologized on-air for homophobic comments he made earlier in a broadcast of a game against the Kansas City Royals. Said slurs were caught on a hot mic.

“I made a comment earlier tonight that I guess went out over the air that I am deeply ashamed of. If I have hurt anyone out there, I can’t tell you how much I say from the bottom of my heart I’m so very, very sorry. I pride myself and think of myself as a man of faith, as there’s a drive into deep left field by Castellanos and that’ll be a home run. And so that’ll make it a 4-0 ballgame.

Back in July of 2021, Nick Castellanos hit another homer as Bally Sports Kansas City Royals broadcaster Ryan Lefebvre gave a eulogy to a man by the name of George A. Gorman. He’s the father of longtime Royals equipment manager Pat Gorman, who had recently passed away.

There were a ton of jokes to be had on social media. Among them, the fact that Castellanos is allowed to take to the plate as a real war is raging in Europe. We don’t need any breaking news on that front with the star outfielder at the plate. Seriously stuff, man.