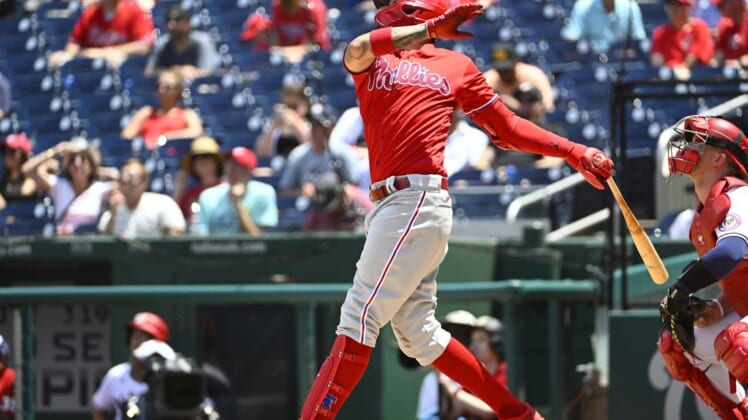 Nick Castellanos drove in two runs and Ranger Suarez pitched into the sixth inning as the visiting Philadelphia Phillies beat the Washington Nationals 5-3 in the opener of a day-night doubleheader Friday afternoon.

The Phillies, who’ve won 13 of their past 15 games, did most of their offensive work early in the game. Bryce Harper and Alec Bohm each finished with three of Philadelphia’s nine hits, while the Phillies drew seven walks.

Josh Bell smacked a two-run home run for the Nationals, who carry a six-game losing streak into the nightcap. Nationals starter Joan Adon (1-11), who has the most losses in the big leagues this season, took the loss.

The Phillies, who stranded 11 runners by game’s end and struck out 11 times, scored just four batters into the game when Castellanos clubbed a two-run double.

Then, in the third, Odubel Herrera’s groundout allowed Harper to score for the second time. Bohm doubled to drive in Castellanos, who had reached on another double, to make it 4-0.

The Nationals got on the board in the bottom of the third when Victor Robles singled and Lane Thomas followed with a two-out double.

Adon made it through five innings, giving up seven hits and matching his season high by striking out six. He dropped his ninth straight decision and the Nationals have lost 10 games in a row in which he has started.

Bell’s homer came in the sixth inning, during a stretch when Suarez allowed four of five batters to reach base before being replaced.

Connor Brogdon, Seranthony Dominguez and Brad Hand came out of the Philadelphia bullpen.

Robles, Cesar Hernandez and Luis Garcia all had two hits for the Nationals. Garcia led off the bottom of the ninth with a single and moved to second on Robles’ one-out walk. They both moved up a base on Thomas’ groundout before Hand struck out Hernandez to end the game.