Nick Castellanos is coming off a fantastic 2021 season with the Cincinnati Reds and after declining his player option, the All-Star outfielder hits the open market as one of the top MLB free agents available this winter.

Castellanos is a compact hitter who’s still just 29. Even if he doesn’t duplicate his 2021 heroics in the coming years, he can have a profound impact on either a World Series contender or a club in the middle of rebuilding. While he is primarily an outfielder, Castellanos' ability to play third base makes him even more appealing to teams.

The Marlins badly need offense and Castellanos would be a much-needed source of hope for manager Don Mattingly’s lineup.

Jazz Chisholm flaunted some power and made a handful of highlight-reel snags at both second base and shortstop last season. Lewin Diaz blasted home runs down the stretch. When healthy, Brian Anderson is an All-Star-caliber player. Jesus Aguilar is a sturdy first baseman, albeit Diaz may supersede him. It’s tough to find another positive. Miami needs veteran help, pronto. Although he’s shaky defensively, Castellanos would provide the Marlins with a proven commodity in the batting order.

Having an established player with a knack for cranking out extra-base hits is an optimum way to complement an otherwise young roster. If young outfielders like Bryan De La Cruz and Magneuris Sierra make strides and Castellanos stays the course, the Marlins would have a respectable outfield corps.

Miami has a superb starting rotation headlined by Sandy Alcàntara, Pablo López and Trevor Rogers. Having a mere competent offense to accompany their deep pitching staff gives the Marlins at least a fighter’s chance to win the NL East.

He’ll command a considerable contract, but the Marlins should be able to sign Castellanos while also adding another proven hitter. On the other hand, they may prefer to spend their dough on a high-level infielder while banking on the combination of De La Cruz, Sierra, Monte Harrison and others coming into their own in the outfield.

The Tigers threw the first haymaker of the MLB offseason on Monday morning, agreeing to a five-year deal with left-hander Eduardo Rodriguez. Detroit can continue an offseason geared towards competing for the American League Wild Card Game by reuniting with Castellanos.

A third baseman for the bulk of his original stay in Detroit, Castellanos would bolster manager A.J. Hinch’s outfield. Akil Baddoo has legitimate pop, and Robbie Grossman is a proven corner outfielder. Castellanos playing in right gives Detroit a compelling starting outfield from an offensive standpoint. Furthermore, he’d be an offensive mainstay for a lineup that was 22nd in MLB in runs (697) last season. 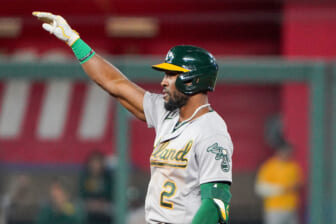 The Chicago White Sox are the team to beat in the AL Central. That said, there are wins to be had in the division given only one of the five teams finished with a winning record last season. Detroit won 77 games, which is impressive given their rebuilding status. Rodriguez deepens an already respectable rotation, and Castellanos would fill a void in right.

A reunion between Castellanos and the Tigers makes a lot of sense this offseason. The team’s 2022 outlook isn’t too far off that of the Reds, Castellanos’ home of the last two seasons, and they have money to spend.

All that being said, top outfield prospect Riley Greene making his way to the big-league club this season could prevent Castellanos from signing with the Tigers, as the front office may want wiggle room in its starting outfield.

Like the Tigers, the Guardians have the ability to pile up wins given the feeble nature of the AL Central. From the latter’s perspective, they have a team with playoff upside but one that needs a boost. Castellanos would be a springboard for their offense.

Manager Terry Francona’s offense includes sluggers like Jose Ramirez and Franmil Reyes alongside a bevy of young players who are looking to find a rhythm. The addition of another intimidating bat like Castellanos is a must-have if Cleveland is going to compete for the playoffs. No matter the way you slice it, they need more production from their outfield.

Oscar Mercado, Bradley Zimmer, Harold Ramirez and Myles Straw have had their moments but as a whole have been inconsistent. Castellanos is a walking model of consistency at the plate. He gives the Guardians someone who can make a difference in any part of the order and would help move runners across the basepaths while creating opportunities for others. Plus, if two of Mercado, Bobby Bradley, Andres Gimenez and a healthy Josh Naylor get back on track/take the next step, Cleveland has a legitimate offensive attack.

All the while, the likes of Shane Bieber, Zach Plesac, Aaron Civale, Cal Quantrill and friends make for one of the best starting rotations in the sport. This is Cleveland’s bedrock. Now they need their offense to play the part.

Cleveland has money to spend, and allocating some of their savings on Castellanos would pay dividends in the immediate future. A hefty, three-to-four-year contract allows the Guardians to compete for the playoffs while having the flexibility to extend Jose Ramirez down the road.