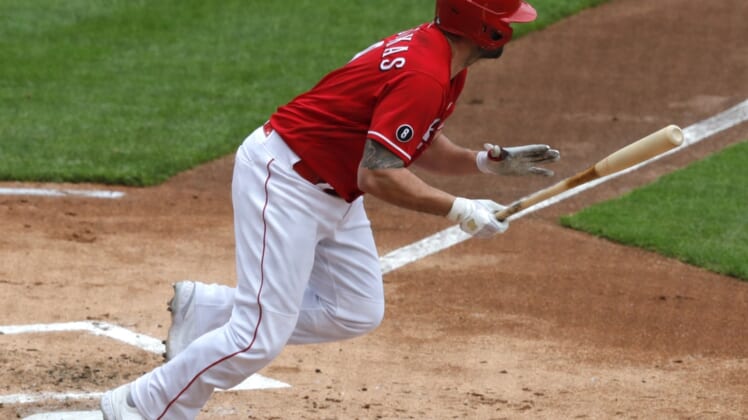 Nick Castellanos hit two of the game’s 10 home runs and delivered a walk-off RBI single in the 10th inning for his fifth hit of the day, as the Cincinnati Reds outlasted the visiting Chicago Cubs 13-12 on Sunday.

According to ESPN, the most combined home runs in a 2021 game prior to Sunday was eight. Yet, it was the liner to center by Castellanos, a former Cubs player, off Chicago’s Craig Kimbrel (0-1) that broke the 12-12 tie and was the difference in a game that featured 30 hits and 15 pitchers.

Barnhart’s two-run homer and Castellanos’ second blast of the game, a solo shot, put Cincinnati up 12-8 in the seventh. However, after Jake Marisnick’s bloop RBI single in the top of eighth, Cubs’ teammate Ian Happ tied things with a long three-run homer to right field.

Happ, who had three hits and scored three runs, was carted off in the bottom of the eighth following a collision with teammate Nico Hoerner on a shallow fly ball.

Kris Bryant (three hits, three RBIs) homered twice, while Anthony Rizzo and Javier Baez also went deep for Chicago, which scored in every inning but the fourth, ninth and 10th, yet still lost for the seventh time in nine games.

With the game tied 6-6 with two outs and the bases loaded in the bottom of the sixth, Chicago reliever Alec Mills hit Moustakas to give Cincinnati the lead. Then Suarez followed with a two-run single to left for a 9-6 advantage.

Suarez entered 3-for-53 in his previous 13 games, but matched that hit total while clubbing his fifth homer. Baez’s two-run homer in the seventh made it a 9-8 game.

Cincinnati starter Tyler Mahle entered with a 1.75 ERA, but he allowed six runs and three homers over five innings, with no walks and five strikeouts.

Winning pitcher Ryan Hendrix (2-0) retired the only batter he faced, Jake Arrieta, a starting pitcher pressed into pinch hitting duty, with runners on second and third and two out in the top of the 10th.