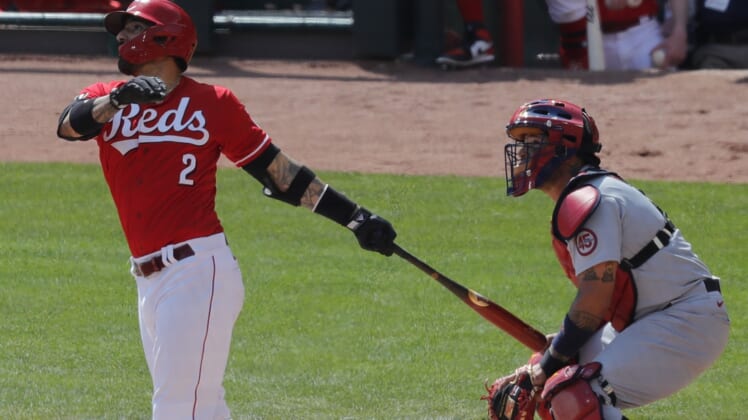 Nick Castellanos’ strong start is a big reason the Cincinnati Reds won their season-opening series against the St. Louis Cardinals. He also has been very good against the Pittsburgh Pirates during his career.

Castellanos looks to stay hot and help the Reds to a third straight win against the Pirates at home on Monday night.

Cincinnati totaled 27 runs, 30 hits and belted six home runs while taking two of three from NL Central Division-favorite St. Louis. According to Elias Sports Bureau, it’s the third time the Reds have scored at least that many runs through the first three games of a season.

It’s an especially strong start after the Reds ranked last in the majors in batting (.212) and 28th in average runs per game (4.05) in 2020. Castellanos went 6-for-11 with a pair of homers, a double, triple, six runs scored and five RBIs during the opening set.

His three-run homer in the fifth inning Sunday broke a 1-1 tie and ultimately helped the Reds to a 12-1 victory.

“Hitting is contagious, and we’re having fun,” Castellanos said. “We’re becoming boys with each other, and that’s step one of a good team.”

Through 46 career games versus Pittsburgh, Castellanos is batting .330 with nine homers, 13 doubles, four triples and a whopping 38 RBIs. Three of those homers came during his first season with Cincinnati in 2020.

He went 2-for-3 with a double last season against Monday’s scheduled starter for the Pirates, JT Brubaker, who went 1-3 with a 5.53 ERA in his nine starts last season as a rookie.

Despite Castellanos’ success versus Brubaker, one of the right-hander’s better outings came at Cincinnati on Sept. 16. He allowed the only run of Pittsburgh’s 1-0 loss over 5 1/3 innings, while also striking out four.

Brubaker yielded 12 hits, including four home runs during spring training, so he hopes to be more refined now that the games count.

The Pirates will be trying to even their mark after dropping two of three to the Chicago Cubs.

“Mentally, I’m focused on throwing strikes and trying to get ahead of batters,” Brubaker told the Pirates’ official website. “I’m not trying to be too fine or so something that isn’t in my style of pitching.”

The Reds will counter with rookie Jose De Leon. He made the 2021 roster despite allowing 12 runs, six hits and 11 walks while striking out 10 over six innings of five relief appearances for Cincinnati last season.

De Leon, who struck out 24 but yielded five homers and posted an 8.64 ERA through five spring-training outings, makes his first start since September 2016 for the Los Angeles Dodgers.

The right-hander, however, won’t have to face budding Pittsburgh star Ke’Bryan Hayes, who was placed on the 10-day injured list with some left wrist inflammation suffered Saturday against the Cubs.

Pirates third baseman Colin Moran went 3-for-8 with a homer in the last two games at Chicago. He has hit six of his nine career home runs against the Reds at Cincinnati.

Cincinnati’s Jesse Winker (3-for-8 in 2021) has batted .360 in 21 home games against Pirates, and hopes to be in the Reds’ lineup after missing Sunday’s game due to illness. Rookie second baseman Jonathan India went 5-for-11 against the Cardinals.

Related: If you’re a fan of the Pirates, check out #Pirates rumors, rankings, and news here.